Newly Discovered Plant Bows Down and Buries Its Own Seeds 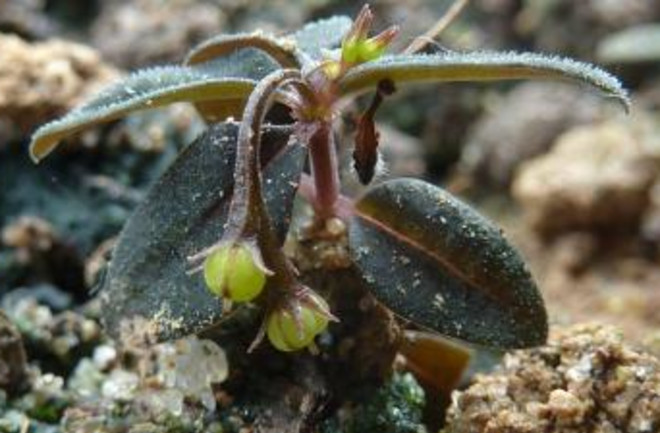 A botanist has discovered a new species of plant in eastern Brazil whose branches bend down upon bearing fruit and deposit seeds on the ground, often burying them in a covering of soft soil or moss. This trick is an example of geocarpy, a rare adaptation to survival in harsh or short-lived environments with small favorable patches. The adaptation ensures seedlings germinate near their parents, helping them stay within the choice spots or microclimates in which they thrive. One well-known practitioner of geocarpy is the peanut, which also buries its fruit in the soil [PDF]. The tiny, inch-tall plant was first spied by the scientist's handyman while he "hunched down behind a shrub for a common human activity," according to the news release. He then brought the strange plant to the attention of botanist Alex Popovkin, who has found and categorized over 800 plant species to date in Bahia, Brazil. The team dubbed it Spigelia genuflexa, named after the act of genuflection, or kneeling to the ground. Reference: Alex Popovkin, Katherine G. Mathews, José Carlos Mendes Santos, M. Carmen Molina, Lena Struwe. Spigelia genuflexa (Loganiaceae), a new geocarpic species from northeastern Bahia, Brazil. PhytoKeys, 2011; 6 (0): 47 DOI: 10.3897/phytokeys.6.1654