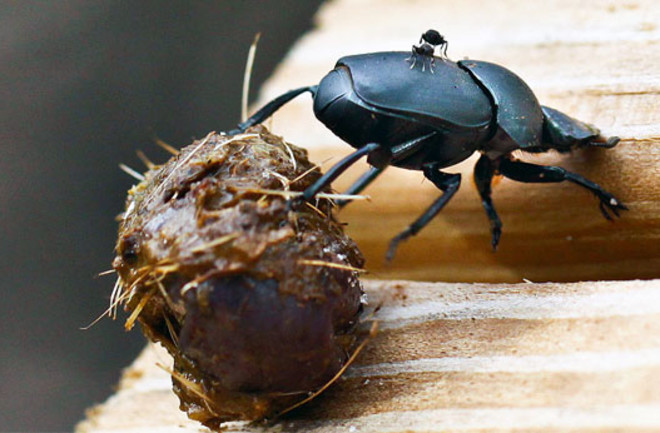 In New Zealand, there's a running joke that the sheep outnumber the people. What's not funny is the consequence of all those woolly creatures: poop. Piles and piles of it. To reduce this overflowing cornucopia of crap, the government is calling in reinforcements in the form of 11 Australian dung beetle species. The country's excess poo not only finds it way into water reservoirs, it also releases nitrous oxide into the atmosphere--and to put that in perspective, cow crap alone accounts for 14 percent of New Zealand's greenhouse gas emissions. "One of the big things basically is the accumulation of dung on pasture surfaces," Landcare New Zealand research scientist Shaun Forgie told the Australian Broadcasting Corporation. It's bad for cattle because more dung increases the "zone of repugnance, which means there's an area around dung which is basically offensive to grazing livestock.... They don't want to eat around that, so unless you break feed, you're losing that surface area to graze on." Dung beetles cut the crap by feasting on it: adults lay eggs in manure, and the baby beetles feed on the scrumptious scat, devouring an entire pile within 48 hours. Farmers are excited about the project, according to the Australian Broadcasting Corporation:

"Dung beetles make a huge difference," says John Pierce, an organic farmer near Auckland. "It's absolutely massive when you start realising that 80 per cent of the nitrous oxide is actually captured and the run-off is virtually eliminated because they just produce so many little holes that the water doesn't run off the fields anymore. It actually goes half a metre deep into the ground."

New Zealand won't be the first nation to import dung beetles as environmental workers: Australia called in the bugs in the 1960s to help clean up their water and reduce greenhouse gas emissions, among other reasons: http://www.youtube.com/watch?v=mqU5ULMvIaE New Zealand's Environmental Risk Management Authority has long worried that the importation of outside species--and their potential environmental impact--outweighed the benefits the dung beetles would confer. But the environmental agency has now been convinced to go ahead; after all, the livestock creating the crap crisis were non-native, imported species too. New Zealand does have a native dung beetle species of its own, but unfortunately it's a bit of a crap connoisseur: It prefers bird droppings over cow piles. As soon as certain regulations are passed, the beetles will be making a trek to Kiwi country. As Bernard Doube, the principal of Dung Beetle Solutions, explained to the ABC

"The dung beetles we'll be sending to New Zealand from Australia are dung beetles that adapt to the winter rainfall regions of Southern Australia.... Some of them come from South Africa and others come from southern Europe."

But don't expect those little dung eaters to solve New Zealand's problems over night. It could take nearly two decades before there are enough beetles for a real onslaught against the ever-growing piles. Related Content: 80beats: Female Dung Beetles Evolved Elaborate Horns to Fight for the Choicest Poop

Discoblog: Enough of This S#%t! Dung Beetles Morph into Millipede-Eaters

The Loom: An Inordinate Fondness For Beetle Horns