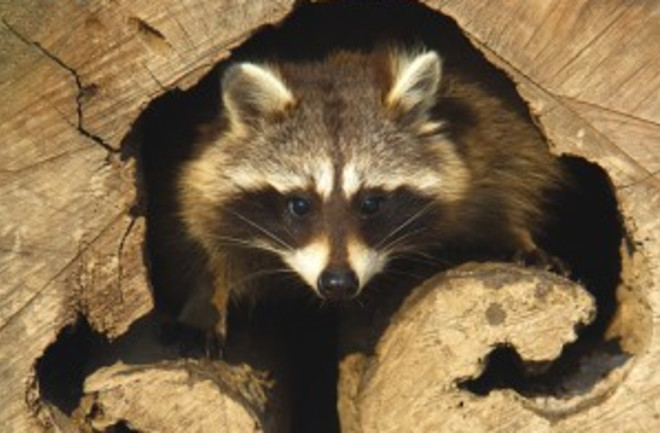 Nine of the virus's victims were found just north of San Francisco and a tenth in southern Oregon. There may be more, too, since raccoons have a habit of hiding when they get sick. Ten raccoons in the past three years have been found on the West Coast with a deadly brain cancer, and scientists are linking the animals' deaths to a virus they had never seen before. While typically elusive and nocturnal, the infected raccoons were seen approaching humans, meandering around during the day, and even passing out. Once the raccoons died, veterinarians conducted autopsies and were surprised to find tumors---a rare occurrence in raccoons---in their brains. Researchers also found what they determined to be the likely culprit in the raccoons' death: a polyomavirus. Variations of this virus are known to cause tumors in birds and mice and a rare kind of skin cancer in humans, but the raccoon polyomavirus was one scientists didn't recognize. Instead of entering its host's DNA, the raccoon polyomavirus wreaks havoc on the brain from outside the raccoon's chromosomes---a novel method for a virus to cause cancer. Scientists are still trying to figure out exactly how it operates. Plus, because cancer is not normally a battle that raccoons need to fight, their immune systems are not particularly prepared to do so.

These images from the study compare a normal raccoon's brain (A) with an infected raccoon's brain (B). The tumor visibly pushes the brain out of shape, affecting normal brain function. The raccoon polyomavirus is more closely related to the human version, rather than that of animals, according to the study published in the January issue of Emerging Infectious Disease. Researchers say this may mean the raccoon virus originally came from people, since urban expansion puts raccoons in contact with more human waste through trash, sewers and the like. Still, researchers caution that at this point there is no way to confirm the virus's source, and that it will not likely spread from raccoons to humans. Top image courtesy of Florian Andronache / shutterstock. Bottom image courtesy of Florante N. Dela Cruz et al.