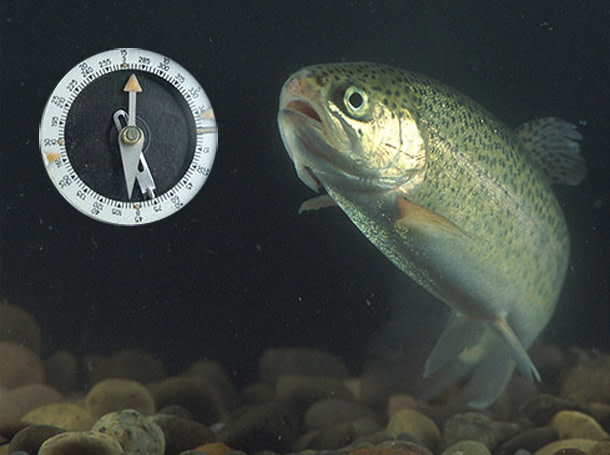 A migrating robin can keep a straight course even when it flies through a cloudy night sky, devoid of obvious landmarks. That’s because it can sense the Earth’s magnetic field. Something in its body acts as a living compass, giving it a sense of direction and position. This ability – known as magnetoreception – isn’t unique to robins. It’s been found in many other birds, sharks and rays, salmon and trout, turtles, bats, ants and bees, and possibly cows, deer and foxes. But despite more than 50 years of research, the details of the magnetic sense are still elusive. Unlike light, sounds or tastes, which come and go, the Earth’s magnetic field is always ‘on’. To study how animals sense it, scientists first have to cancel it out using magnetic coils, and set up their own artificial field. The field also pervades the entire body, so there’s no obvious opening, like an eye socket or ear canal, where a magnetic sensor would most likely lie. In birds – the best-studied of the magnetic-sensing animals – scientists have narrowed down the location of a possible sensor to the eye (sometimes, just the right one), the beak, and possibly the inner ear. But it’s been far trickier to find the individual cells responsible for sensing magnetic fields. Now, Stephan Eder from the Ludwig-Maximilians-University in Munich has developed a way of doing that. It’s deceptively simple: look at cells under a microscope surrounded by a rotating magnetic field, and spot the ones that start to spin. Eder focused on the nose of the rainbow trout. Back in 1997, Michael Walker showed that one of the fish’s facial nerves produces electrical signals when exposed to magnetic fields. He also identified cells in the nose that seemed to contain iron crystals, and could be magnetoreceptors. Eder tested this idea by placing tissue from a trout’s nose inside a “magnetoscope” – a microscope surrounded by magnetic coils. The coils produced a slowly rotating field, and Eder noticed that 1 in every 10,000 cells started spinning. “It was a Eureka moment,” says Michael Winklhofer, who led the study. “I was really happy that it worked.”

The rarity of the cells illustrates just how difficult magnetic senses are to study. “We are faced with a needle-in-a-haystack problem,” says Winklhofer. “The cells are strongly magnetic, and if they are spaced too closely, they interfere with each other, which would deteriorate the sensitivity of the magnetic sense.” All of the spinning cells had a dark mass at their tips, which turned out to be rich in iron. It’s probably made of an iron mineral called magnetite, the same stuff found in compass needles. Eder thinks that this iron clump is somehow anchored to the cell’s membrane. As the magnetic field rotates, the iron spins and drags the cell along with it. “For about 30 years, many researchers have suspected that at least some animals use magnetite crystals to sense magnetism,” says Ken Lohmann, who studies turtles and lobsters. “[But] magnetite particles in animals are tiny, and finding them under a microscope has proved to be exceedingly difficult. This new study reports a simple, clever way of doing that.” There are other ways of spotting iron-rich cells, but their shortcomings have led scientists down dead ends before. For example, a dye called Prussian Blue can stain iron deposits, but these aren’t always magnetic. For years, scientists thought that pigeons had magnetite-loaded neurons in their beaks. Earlier this year, Christoph Treiber destroyed that hypothesis by showing that the “neurons” were actually white blood cells, and the “magnetite” was actually iron scavenged from red blood cells. With Eder’s method, such false positives shouldn’t happen – if the cell spins, it’s damn well magnetic. The method also shows that these cells are more sensitive to magnetic fields than anyone would have guessed – sensitive enough to pick up small variations in direction and intensity. As Eder writes, “[They are] not only sufficient to detect the direction of magnetic north but also likely to form the basis of an accurate magnetic sensory system.” “Whether or not these cells are actually responsible for detecting magnetic fields remains an open question,” says David Keays, who led the study that debunked the magnetic beak neurons of pigeons. “It looks promising, but more experiments will be required for a convincing case to be made.” This study should pave the way for such experiments. It could be used to isolate large numbers of magnetic cells from different animals. These could then be “individually harvested” to understand their genetic and physical characteristics, according to David Dickman who was the first to find neurons that respond to magnetic fields. Winklhofer’s team is now planning on using the technique to study other parts of fish, and the beaks of homing pigeons. Perhaps they can finally resolve the controversy over the neurons and macrophages. Meanwhile, it’s worth noting that Eder’s spinning method only applies to cells containing magnetite or other iron crystals. There are other ways in which animals could sense magnetic fields. One alternative involves the eye, a molecule called cryptochrome, and some quantum physics. Have a look at my feature for New Scientist for more on that. Reference: Eder, Cadiou, Muhamad, McNaughton, Kirschvink & Winklhofer. 2012. Magnetic characterization of isolated candidate vertebrate magnetoreceptor cells. PNAS http://dx.doi.org/10.1073/pnas.1205653109More on magnetoreception: