Chameleons are known for their vibrant color changes. While the old wives' tale that they change color to match their surroundings isn't true, they are capable of remarkable shifts in hue, a trait which has fascinated scientists for years. Now, scientists have learned from the little lizards, and have created a material that, like chameleons, can shift its colors seemingly effortlessly.

This silicon material changes color when it is stretched or compressed, just like chameleon skin. The material was created by Connie Chang-Hasnain, a professor of electrical engineering at University of California Berkeley, and her students, Li Zhu and James Ferrara, with the help of visiting student Jonas Kapraun. “One day in our group seminar we started to think about color," Chang-Hasnain explained. "We looked at what was known at the time about how chameleon skin could change color, and we were fascinated by that, and we thought we could design for it." And as they reveal in a study published in Optica this week, they were right. The Berkeley team has created a color-changing film from silicon that uses the same principle behind chameleons' quick-changing skin: structural color. Earlier this week, a team of scientists from the University of Geneva unveiled their new publication in Nature Communications which explained that the secret to the chameleon's quick wardrobe changes is a lattice of nanocrystals that in the reptile's skin, which takes advantage of an optical phenomenon known as structural color. 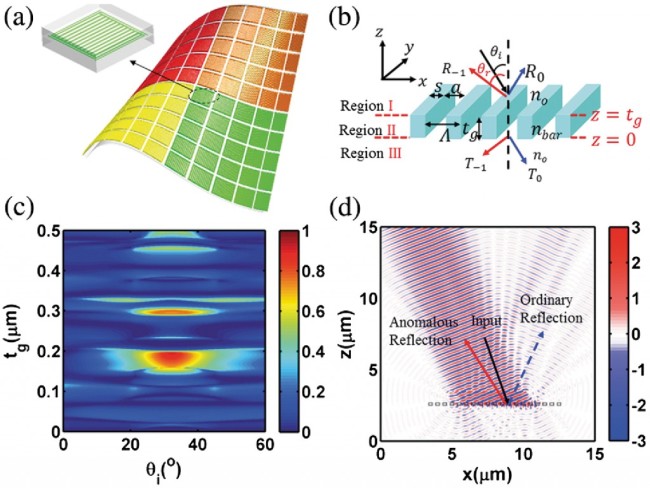 A visual description of how the new material works. Figure 1 from Zhu et al. 2015. Instead of absorbing light and emitting a specific wavelength, like a dye or pigment, structural colors are produced by the physical interaction of light with a three-dimensional surface. When the light hits grooves or ridges, different wavelengths bend and bounce differently. This may lead to constructive interference of some wavelengths, while others are reflected, thus making us see a certain color. Structural colors, because they rely on the geometry of light and the nanosurface, look slightly different from different angles, thus appearing shimmery.The blue we see in a peacock's feather or the iridescence of a beetle's carapace are also examples of structural colors, but the chameleons have truly perfected the art of manipulating nanostrucures to change colors at will. The top layer of chameleon skin contains guanine crystals arranged in a lattice. Also in the skin are actual pigments—yellow and red—which are either enhanced or muted by changes in the structural color reflected by the crystals. When the crystals are packed in tightly with little space between them, they reflect bluer wavelengths, making yellow patches appear green and red patches seem purple or brown. But when the crystals are pulled further apart, they reflect redder wavelengths instead, making the yellows seem orange and the reds even more vibrantly red. https://www.youtube.com/embed/YSH7EmXFMac https://www.youtube.com/embed/YIRiCwHlUd8 By tightening or relaxing its skin, a chameleon can manipulate the distance between crystals, and thus change the color that is reflected by the nanocrystal lattice—just like the Berkley team's material. The manufactured color-changing "skin" is created by stamping small lines into a flexible silicon membrane. “These silicon bars or ribbons are very very thin, about 100, maybe 120 nanometers thick, which is 1/1000th of the diameter of a human hair,” explained Chang-Hasnain. Because the membrane itself is made of flexible silicon, the spacing between these tiny lines can be altered by stretching or squeezing the surface, which changes which wavelengths of light are reflected back. “What we’ve designed is extremely effective in changing color,” she said. The idea of using the physical properties of light interacting with a membrane isn't new, but what makes this material so unique is that it acts as a reflective surface rather than a filter. “We’re trying to mimic the chameleon, and use patterns whose periodicity is orthogonal or vertical to the direction of viewing,” explained Chang-Hasnain. It takes a lot of computing power to calculate the spacing of the bars to determine what color they'll reflect as they're stretched or squeezed, thus until modern technologies, such a material would have been impossible to create. 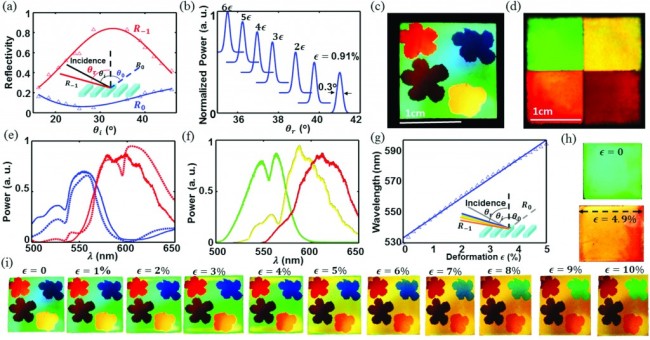 This figure from the paper shows how slight changes in the spacing between the ribbons allows the material to reflect different colors of light. Image courtesy of Dr. Chang-Hasnain. 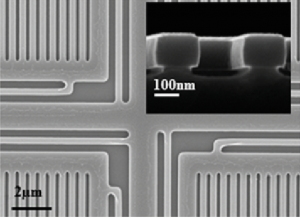 The main difference between chameleon skin and the fabricated silicon one is that the manufactured skin uses lines instead of dot-like structures like the lizard's crystals. “It’s just lines or bars—periodic patterns of ribbons,” said Chang-Hasnain, but the team is "looking into two-dimensional structures, like posts or dots, to better mimic chameleon skin." The reason they started with lines is that the fabrication of dots is a little more challenging.

Chang-Hasnain thinks that color-changing films like this may revolutionize sensor technology, as they would be a relatively simple and cost-effective way of detecting even small amounts of stress on rigid surfaces, like in building sensors or airplanes. The material also might be useful in biosensors. And if the team can scale up the size of the silicon films—which is one of the next steps in the research—they may even be used to create color-changing camouflage for soldiers.

The researchers also want to find a way to control the color changing in an active manner, rather than the mechanical method currently used. “We want to be able to use electric fields to tune the colors,” Chang-Hasnain said. Electrical currents also change the refractive index of a material, and she is hopeful that future iterations of the many-colored membrane will be able to use a more conductive base that allows current to travel through it to make changing the color as easy as flipping a switch.