New Round In The East-West Sweet Potato Kerfuffle 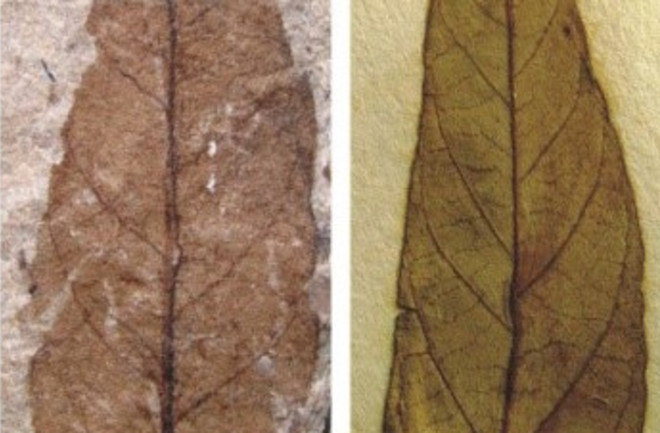 Sorting out the roots of the sweet potato and other members of the morning glory family, researchers compared a fossil leaf of Ipomoea meghalayensis (B) with a leaf of the modern Ipomoea eriocarpa, a close relative of the tasty tuber. (Credit Indiana University) What's the story, morning glory? Well, let me tell you: the sweet potato and other morning glory family members may have been around millions of years earlier than believed — after first sprouting thousands of miles from where many paleobotanists thought they evolved. Much like last year's discovery that nightshades (which include both the delicious, like tomatoes, and the deadly, such as belladonna) are much older than previously thought, researchers believe they have evidence that the morning glory family, which includes sweet potatoes, goes back much further. But perhaps more importantly, the new study also points to Asia, not North America, as its birthplace. The morning glory family, Convolvulaceae, includes a huge number of plants: more than 1,800 species, ranging from popular suburban garden flowers to economic powerhouses such as the sweet potato (one of the most important global crops and also, for my money, the tastiest tuber of them all). Previous fossil finds suggested their origins were in North America, about 35 million years ago. The morning glory family belongs within the same order (Solanales) as the nightshades (Solanaceae), also long believed to have evolved around that time, or possibly a little earlier, in what's now North America. With both plant families, however — and with plants in general — the fossil record is thin on evidence. (Hey, it's tough to preserve a plant for millions upon millions of years. Just think how long lettuce lasts in your fridge.) Over the last decade or so, a series of papers modeling the morning glories' evolution based on modern specimens' DNA had hinted that the plants might have gotten their start in Asia 55 million-85 million years ago. The conflicting claims set off an East-West debate among paleobotanists. If only there were Asian fossils to set the record straight! Well, now there are. You Got To See It To Be-Leaf It A team of researchers looking at 200 fossilized leaves collected from the East Garo Hills District of Eastern India (yellow dot on map below) identified 17 specimens belonging to a newly described species, Ipomoea meghalayensis. The species name derives from the region in which they were located (Meghalaya) but Ipomoea places the fossil plants firmly in morning glory territory, in the same genus as the sweet potato (Ipomoea batata).

Modern distribution of the sweet potato family (yellow line) and genus (white line). (Credit Indiana University) The fossil finds are 55.8 million-58.7 million years old, pushing back the clock on Convolvulaceae in general and firming up the evidence for an Asian origin. The new evidence also suggests that morning glories and nightshades split even earlier than previously found fossil foliage suggested. The study appears today in PNAS.