New Relative of T. Rex, the "Gore King," is Discovered 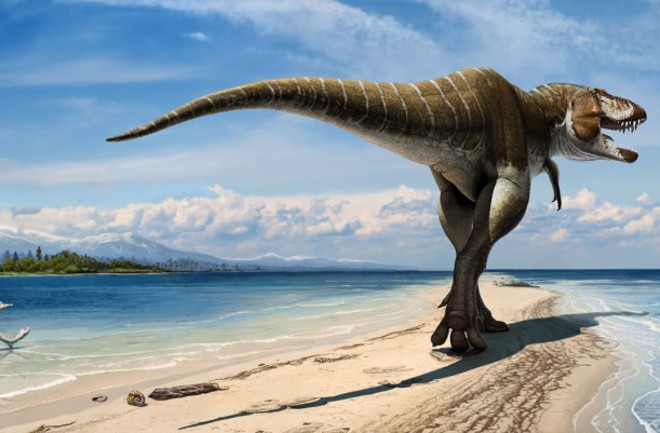 Wahweap coastline tyrannosaur by Andrey Atuchin. Image credit: Natural History Museum of Utah. Who ruled the dinosaur dynasty before the king of the dinosaurs? This guy. Lythronax argestes, or "Gore King of the Southwest," was discovered in Utah in 2009 and is formally announced in a journal article this week. The carnivorous beast is the earliest known member of the tyrannosaurid family, which includes the infamous Tyrannosaurus rex. The 24-foot skeleton is thought to be that of a juvenile who in life weighed 2.75 tons---markedly smaller than the 40-foot length of the average T. rex. Like Tyrannosaurus, though, L. argestes had enormous and frightening teeth embedded in a short snout, and forward-facing eyes, which gave it depth perception that other dino species lacked.

The species provides further hints about the ancient landscape that drove dinosaur speciation. As described in The Verge,

Lythronax lived on the ancient continent of Laramidia, a split-off portion of North America that ran from Alaska, down the west coast of the US, and into Mexico. The researchers suggest that the sea that divided North America may also have spilled over into Laramidia, at times dividing its north and south and allowing dinosaur genera to divide into a variety of species.

The new species dates back 80 million years, far older than any other member of this family. This pushes back the evolution of tyrannosaurids by a lot, according to the paper in PLOS One. Turns out T. rex, at 69 million years old, is the last of his kind, not the first. As LiveScience reported:

That close relationship means most of the branches of the tyrannosaurid family must have split before 80 million years ago, earlier than once thought, [Randall] Irmis said. And what that means is a bevy of dinosaur missing links. "There's a whole slew of new tyrannosaurids waiting to be found out there," Irmis said.

You can check out the Gore King at the Natural History Museum of Utah exhibit, where it's waiting to inspire the next generation of dino hunters.