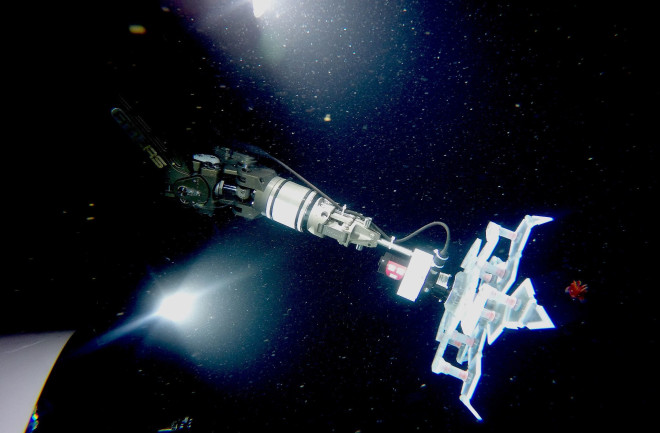 Scientists are using a new origami-inspired robotic claw to catch fragile sea creatures without harming them. (Credit: Wyss Institute at Harvard University) A new origami-inspired robotic claw that looks like a cross between a flower and a crab pincer could help marine biologists capture delicate underwater organisms currently unknown to science. The oceans are the largest and least-explored habitats on Earth, with some estimates suggesting that up to a million unknown species lurk within its deepest waters. Marine biologists typically use submarines or remotely operated vehicles (ROVs) to grab or scoop life from the seafloor, but plucking sea life from the open water still often proves difficult with existing tools. Many of these organisms have soft, delicate bodies that are easy to damage or destroy. Nets can shred gelatinous organisms like jellyfish. So researchers usually rely on capturing sea life in the open water using either suction tubes, which can kill delicate specimens when they zip inside the plumbing, or by catching them in jars with lids, which requires great dexterity. Now scientists have developed a new way to safely trap delicate marine life using a robotic device that can fold around its targets.

The new device has five identical origami-inspired "petals" attached to a series of rotating joints around a central point. When the device is brought near a creature underwater, a single motor folds its 3-D-printed petals around an animal, enclosing the organism in a hollow dodecahedron, a kind of polyhedron with a dozen pentagonal facets. The team also added soft edges to the device's petals to help protect animals. "Just one motor drives all the mechanisms that make the device fold in 3-D space," said study lead author Zhi Ern Teoh, a mechanical engineer now at engineering consulting firm Cooper Perkins in Lexington, Massachusetts. The researchers tested their device at Mystic Aquarium in Connecticut, where it successfully collected and released moon jellyfish underwater. They also modified it so it could withstand the open sea, and then mounted it on a ROV from the Monterey Bay Aquarium Research Institute in California. They tested it nearly half a mile below the ocean surface, where it successfully captured and released squid and jellyfish in their natural habitats. "This origami-inspired dodecahedron represents a new mode of delicately interacting with marine life," said study co-author David Gruber, a marine biologist at Baruch College and the Graduate Center of the City University of New York.

The simplicity of the design reduces the number of parts that can break, lending it to use in hostile environments such as the deep sea or outer space "where it can be hard to send a repair crew," Teoh said. "Motors are inherently complex, so by minimizing the number of motors in the device, we potentially reduce the number of points of failure." The researchers are now working on a more rugged metal version of the device for heavy-duty work. They also would like to enhance it with a variety of sensors. "The dream is to enclose a delicate deep-sea animal, take 3-D imagery that includes properties like hardness, 3-D-print that animal at the surface, and also have a 'toothbrush' tickle the organism to obtain its full genome. Then, let the animals go," Gruber said. "The hope is to describe new species and learn and interact with the deep sea in a non-invasive fashion." The scientists also suggested their design strategy could help lead to novel folding mirrors and solar arrays for space telescopes, and even self-deployable habitats for extraterrestrial colonies. They detailed their findings online July 18 in the journal Science Robotics.