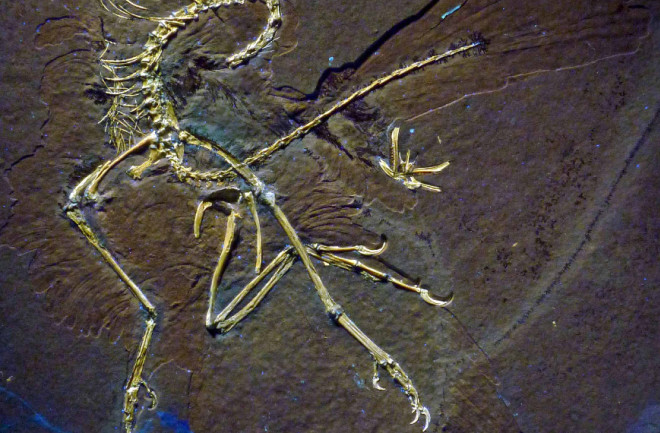 The new specimen of Archaeopteryx under ultraviolet light. Photo courtesy of Helmut Tischlinger. We all know the early bird gets the worm, but apparently it also gets a fabulous set of feathered "trousers." Extensive feather preservation on a new specimen of Archaeopteryx, the earliest known bird, is giving researchers an unprecedented look at how both feathers and flight may have evolved among theropod dinosaurs, the ancestors of modern birds. The fossil's plumage also challenges previous theories about why feathers evolved. Birds of a Feather Feathers covered not only the new specimen's wings and tail, but also its entire body, including its legs. Short, tuft-like feathers on the fossil's ankles have the appearance almost of pant cuffs, prompting researchers to describe the animal as wearing feathered "trousers." All of the preserved feathers are pennaceous, or non-downy. Pennaceous feathers are key to birds' ability to fly, and their evolution has long been debated among paleontologists. Researchers in both the United States and Europe had previously argued that Archaeopteryx had weak feathers that limited its ability to fly. But the authors of today's paper, published in Nature, contend that earlier research was based on fossils with inferior feather preservation. The new Archaeopteryx fossil, found in Germany, is so exquisitely preserved that the identification of the structure of individual feathers is still possible even in areas with significant overlapping of those feathers. The impressive preservation allowed the research team to analyse the variety and location of several different types of pennaceous feather on the animal's body. They concluded that the feathers of Archaeopteryx evolved for a function other than flight, most likely as display, similar to the colorful plumage of many modern birds. According to the new findings, the eventual, crucial role the feathers played in flight was an exaptation: essentially, an evolutionary re-purposing of an existing trait. Researchers took their exaptation theory one step further by suggesting not just feathers, but also forelimb anatomy and other physiological traits, evolved in therapod dinosaurs for non-flight-related functions. This selection likely happened repeatedly and in different species at different times, creating a far more complex evolution of birds than previously theorized.