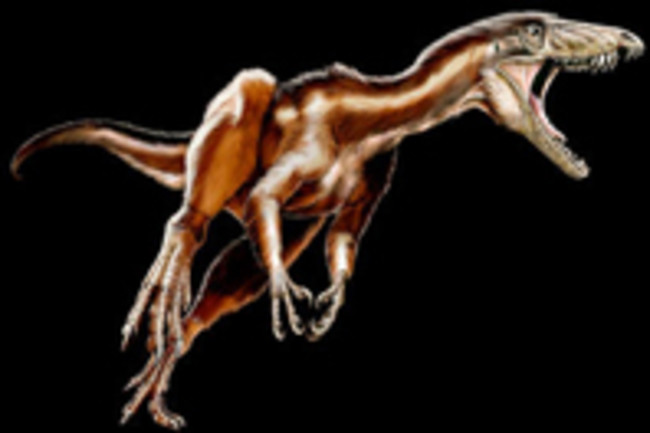 Sixty-five million years ago—we know when the dinosaur story ends. But the beginning of the dinosaur age is hazier, due to the small number of distinct fossils with which to set a time frame. But now scientists have turned up fossils in New Mexico of an early dinosaur ancestor, they report tomorrow in the journal Science, one that points to South America as the possible place of dinosaur origin.

The feathered beast, named Tawa hallae, was the size of a large dog and sported a long neck and tail, a slender snout, and sharp, curved teeth to catch and kill its prey [The Guardian]

. Tawa hallae is an early theropod, meaning it is related to birds and the mighty T. Rex. The New Mexico fossils date back to approximately 213 million years ago, shortly after dinosaurs began to emerge

. Tawa appears to be related to another dino forerunner,

Herrerasaurus, and researchers say that the relationship proves that Herrerasaurus was also a theropod. Both lived in the time of the super-continent Pangaea, when all the present-day continents formed one land mass.

Because Herrerasaurus was found in what is now South America near some early sauropods and ornithischians, this strongly suggested that all three main lineages diverged early on [The New York Times]

. Researchers say that this evolutionary pattern in consistent with the theory that the earliest dinosaurs spread out across Pangaea before the continents broke up. For lead researcher Sterling Nesbitt, the condition of the fossils was as surprising as what they represent.

"When we saw them, our jaws dropped. A lot of these theropods have really hollow bones, so when they get preserved, they get really crunched. But these were in almost perfect condition," Nesbitt said [The Guardian]