New Fleet-Footed Diminutive Dino May Be a T. Rex Ancestor 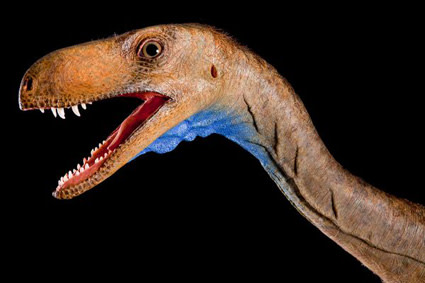 In the ground of Argentina, paleontologists are digging deeper into dinosaur history, back to the point more than 200 million years ago when this group emerged. Now a group says in the journal Science that it has recovered one of the oldest dino fossils ever found: a 230-million-year-old tiny forerunner of the T. rex, called Eodromaeus. At four feet in length and sporting impressive teeth, the new dino species appears to have been a speedy carnivore—and, possibly, adorable.

“It was very cute; you’d want it as a pet,” said Paul Sereno, a paleontologist at the University of Chicago and one of the study’s authors. “But it might be best as a guard dinosaur, to keep the dogs away.” [The New York Times]

Sereno's analysis of Eodromaeus, which lived at the time that present-day Argentina was southwestern Pangea, turned up evidence that he says places it early in the line of the theropods

Like those fearsome descendants, Eodromaeus had a long rigid tail, a unique pelvis shape, and air sacs in its neck bones that may have been related to breathing—and which add to evidence that theropod dinosaurs eventually evolved into today's birds. [National Geographic]

A fascinating find on its own, Eodromaeus could to shake up what paleontologists know about the dawn of the dinosaurs. Before this find, the earliest known theropod was considered be Eoraptor, which lived at the same time as the new Eodromaeus. But after a look at Eodromaeus, Sereno's team argues that Eoraptor is actually a forerunner of the sauropods

—those largest of dinosaurs, including the Brachiosaurus

The argument for kicking Eoraptor out of the theropod lineage focuses on the fact that Eodromaeus and Eoraptor lived at the same time and that Eodromaeus has very marked theropod-like features, whereas Eoraptor not only lacks these but also has the inset lower first tooth and enlarged nostrils of a sauropodomorph.

Still, the differences between the two creatures are slight, Sereno says, and not all paleontologists are yet convinced that Eoraptor truly belongs to the sauropod line. Related Content: DISCOVER: Destination Science: Hunting Dinosaurs with Jack Horner

, on paleontologist Phil Currie 80beats: T. Rex May Have Been a Hot-Blooded, Sweaty Beast