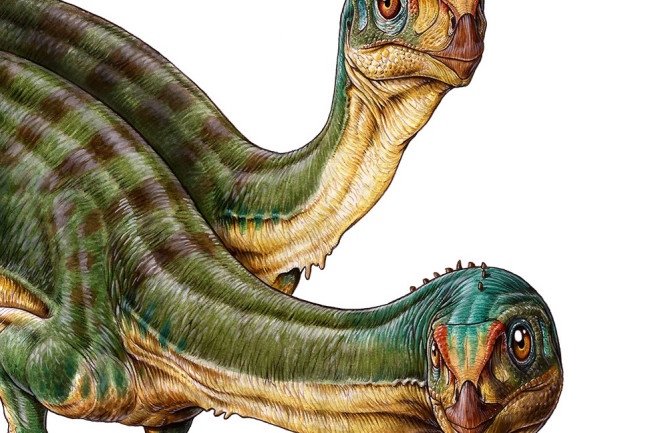 Chilesaurus diegosuarezi, a Jurassic herbivore at the heart of a controversial dinosaur family tree rewrite. (Credit Gabriel Lío) Remember that paper that dropped a few months ago completely rewriting the dinosaur family tree? Well, the researchers are back, this time using one of the odder dinos out there as evidence for their explosive claim. Is it legit or just hype? Back in March, researchers argued for a total takedown of the long-established dinosaur family tree. Today, Matthew Baron and Paul Barrett, two of the three authors of that previous Nature paper, try to bolster their case with a new look at Chilesaurus diegosaurezi, a South American herbivore with a unique mash-up of features. Veggiesaurus First described in 2015, Chilesaurus was found in 2004 by Diego Suarez, a young boy traipsing around the southern Chilean wild with his geologist parents. It's a sweet story about a young citizen scientist accidentally striking gold (the seven-year-old thought he was collecting cow bones), but the animal itself was also more interesting than the average dino find. Chilesaurus, which roamed the planet about 145-150 million years ago, was originally grouped with the theropods, those bipedal carnivores that include, most famously, T. rex and velociraptors (as well as the lineage that eventually led to modern birds). There was just one problem: the small size of its head, its leaf-shaped teeth, plus a keratin-covered, beak-like feature called a rhamphotheca at the end of its snout, all screamed "plant-eater." Like that lone vegan relative at the family Thanksgiving table, Chilesaurus was the odd one out among flesh-ripping, bone-gnawing theropods. And... okay. There were a couple other problems in terms of Chilesaurus being a convincing theropod. Its feet were wider and had more toes — four to the typical theropod's three — which are more primitive traits harkening back to the earliest dinosaurs. To top it off, Chilesaurus had the pelvic girdle of an ornithischian. More on the nitty-gritty of dinosaur pelvic girdles in a moment. What matters right now is that Chilesaurus seemed to have a number of ornithischian traits. The ornithischians included everything from four-legged armored ankylosaurs to duck-billed hadrosaurs. And Ornithischia is a completely separate branch on the dinosaur family tree from Theropoda. Or is it? Shaking The Family Tree Back in March, Baron and Barrett (along with co-author David Norman) proposed in Nature that the traditional dinosaur family tree was all wrong. For more than a century, paleontologists divvied dinos up into two major branches, Ornithischia and Saurischia, a split which they believed occurred very early in the dinosaur story, at least 230 million years ago. Saurischia then later split into Sauropoda (mostly big, sometimes enormous and entirely herbivorous four-legged dinosaurs such as Brontosaurus and the titanosaurs) and Theropoda (the aforementioned bitey types). Baron and company made the case, however, for a much different story. According to their model, Sauropoda was off doing its own thing, possibly related to the very early dinosaurs known as Herrerasauridae. Meanwhile, the main branch of the dinosaur family tree, which they named Ornithoscelida, consisted of both Ornithischia and Theropoda. Whoa. Months after that study came out, it still blows my mind. Here's a nifty graphic summary to look at while I collect myself.

The dinosaur family tree, before and after new research results published in Nature. The revision upsets one of the longest-held notions about how species can be classified. (Credit Baron et al, doi:10.1038/nature21700) The massive dinosaur family tree rewrite was the result of a new dataset they compiled that compared traits of early dinosaurs and dinosauromorphs, the even earlier archosaurs that were not quite dinos yet. One criticism of the March bombshell paper was that they focused on comparing animals from the dawn of the dinosaur age. So Chilesaurus, from roughly the middle of the period When Dinosaurs Ruled The Earth and with its patchwork of traits, made arguably the perfect species to turn their attention to next. Oddball or Early Adapter? Other researchers had previously placed Chilesaurus in Theropoda by comparing it to a different collection of dinosaurs, one that the authors of today's study suggest was a little light on ornithischians. Even then, the team that first described Chilesaurus acknowledged Theropoda wasn't a great fit, though it was the most likely based on their dataset. It turns out, according to today's study, that when Baron and Barrett added Chilesaurus to their dataset of early dinosaurs and dinosauromorphs, the animal fit rather well as a very early ornithischian, or even a possible "transitional" species leaving the theropod trunk to branch off into Ornithischia. One of the big tip-offs to placing Chilesaurus at the base of Ornithischia was, yep, that pelvic girdle. Let's get all up into the whole dinosaur pelvic girdle issue. Indulge me. Ornithischians, whether they resemble tanks or more gracile semi-bipedal sorts, have a pelvic girdle with both the ischium and pubis pointing backwards. They were all herbivores (hey! You know who else is an herbivore...Chilesaurus!), and the shape of their pelvic girdle left more room for a big gut to process all that vegetative matter. Yum.

Typical ornithischian pelvic girdle (Credit Wikimedia Commons) Saurischians, on the other hand (and, according to the traditional dinosaur family tree, on the other branch), have an ischium that points backwards and a pubis that points forward which, most researchers believe, allowed some lineages to develop into particularly efficient bipeds. You don't need room for a big belly when all you're eating is meat. Consider the cow versus the cat.

Typical saurischian pelvic girdle (Credit Wikimedia Commons) Back to Chilesaurus. The animal — which, by the way, is known from several specimens — had a pelvic girdle with rear-pointing pubis and ischium, like the ornithischians. Originally, researchers thought it was an example of convergent evolution: birds, for example, also have a backwards-pointing pubis and ischium, even though they evolved from one of the theropod lineages. (Convergent evolution is not uncommon in the fossil record: unrelated species occupying similar ecological niches can survive and thrive through similar adaptations.)

The pelvic girdle of Chilesaurus as shown in the 2015 Nature paper describing it for the first time. (Credit Novas et al, doi:10.1038/nature14307) Reclassifying Chilesaurus as an ornithischian — which is still being debated — fits if, and this is a big if, the field accepts the dinosaur family tree rewrite first proposed in March. Personally, I'm willing to believe that the textbooks may need rewriting one day — but it is not this day. Chilesaurus is still a strange animal no matter where you place it in either the traditional dinosaur family tree or the remix. Accepting it as an early ornithischian, right at the ornithischian-theropod split within Ornithoscelida, means that paleontologists still have to reconcile what it was doing running around more than 90 million years after the split actually occurred. It means that there had to have been an as-yet-unknown "ghost lineage" of Chilesaurus-like basal ornithischians, its ancestors, holding onto many of their more primitive traits for tens of millions of years while the rest of Dinosauria exploded with adaptations. Sure, stranger things have happened, but I'm not persuaded. Yet. Today's second look at Chilesaurus appears in Biology Letters.