New Dinosaur: Getting Inside the Head of a Giant 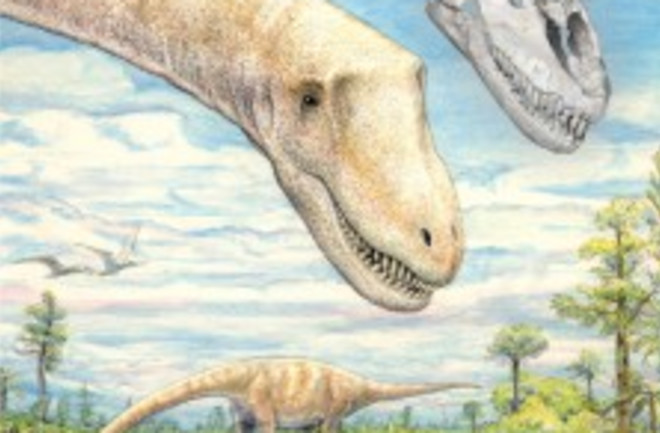 Sarmientosaurus musacchioi, shown with a rendering of the nearly complete skull found in Argentine Patagonia, is giving researchers new insights into the vision and hearing of the largest dinosaurs. Credit: Mark A. Klingler, Carnegie Museum of Natural History and WitmerLab, Ohio University.Sarmientosaurus musacchioi, the newest titanosaur, is a sexy beast out of Argentine Patagonia. I say "sexy" because I like big brains and I cannot lie. And Sarmientosaurus is special because the lone specimen is comprised of a partial neck and, more importantly, a beautifully preserved skull. That's a rarity among titanosaurs, the largest and arguably most evolved of the sauropod dinosaurs. And now, with CT scanning, we can peer into its brain and discover tantalizing clues about the animal's sensory capabilities. Published today in the open-access PLOS One journal, the Sarmientosaurus story is about 95 million years old, from the middle of the Cretaceous. That's a time when titanosaurs, which include several dozen species, were common across the Southern Hemisphere. Despite the ubiquity of these herbivorous giants, Sarmientosaurus is just the fourth reasonably complete skull found. (Why do titanosaurs lose their heads? When you've got a little noggin and it's at the end of a loooooooong neck, as your remains get scavenged and decompose, your head is likely to be the first thing to get washed away in a flash flood, or perhaps taken away like a restaurant doggie bag by some enterprising carnivore.)

Bottom-feeder (in a good way)

S. musacchioi was not the largest titanosaur, but thanks to its nearly complete skull, our understanding of the biggest dinosaurs moves several steps a-head. Ahem. CT scans of the Sarmientosaurus skull allowed researchers to create a brain endocast and analyze the dinosaur's vision and hearing. Verdict: impressive, most impressive. It appears that Sarmiento had large eyes and good vision. Based on the shape of its inner ear, researchers believe it was able to hear low-frequency sounds better than other titanosaurs. Another cool finding: the balance organ in its ear suggests that Sarmiento usually held its head snout to the ground, which means it probably fed mostly on low-growing vegetation.

Digital renderings of S. musacchioi's braincase (left) and reconstructed eyeball with associated musculature (right). Scale bar equals five centimeters. Credit: WitmerLab, Ohio University. Want more? Check out this trippy video that lets you see the endocast from all angles and calls out individual components. But a warning: if you're having a stressful day at work, you may find the slowly spinning image mesmerizing and lose yourself in it for minutes, if not hours. Thanks to this announcement and last week's post about poor doomed UA9998, the baby Rapetosaurus, it's turning into Titanosaur Month here at Dead Things. I'm okay with that. These massive, long-necked, long-tailed herbivores are fascinating, and also remind me of one of my favorite Monty Python skits (not that Brontosaurus was a titanosaur, but you get the idea).