Nearly Perfectly Preserved Fossil Puts This Reptile Back on Land 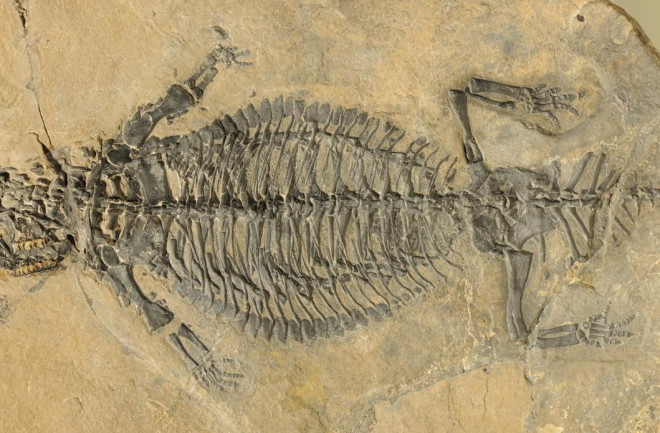 (Credit: Dr. Torsten Scheyer; Palaeontological Institute and Museum, University of Zurich, Switzerland)A new, beautifully preserved specimen of a reptile from the Triassic boots the species out of the water and back onto land. The fossil in question is a small reptile dating to around 241 million years ago called Esaurosphargis dalsassoi. It was found by researchers from Switzerland in the eastern part of the Swiss Alps, armored plates, frilly spikes and all. It's only the second fossil of this species ever discovered, and the exquisite detail of the find is helping researchers to better understand its lifestyle. The only other example of E. dalsassoi known to scientists is an incomplete and disarticulated fossil from Italy, found in 2003. Based on the fossils of fish and other aquatic creatures found nearby, the species was at the time assumed to be primarily a water-dweller, similar to plesiosaurs and ichthyosaurs.

An artist's reconstruction of what E. dalsassoi may have looked like. (Credit: Beat Scheffold; Palaeontological Institute and Museum, University of Zurich, Switzerland) Physiological details from the new find are putting the kibosh on that line of thinking, however, revealing that E. dalsassoi would have been fairly unsuited to life beneath the waves. Its arms, legs and tail weren't set up for swimming, and the reptile's body was bulky and blunt — not the sort of design meant for cutting through the water. The researchers detail their findings in a paper published Friday in Nature Scientific Reports. Instead it, probably lumbered around on land, protected by a shell of hard armored plates and a line of spikes down its sides. At about eight inches long, E. dalsassoi wouldn't have been a fearsome predator, except perhaps to insects, but would have enjoyed the impunity against predators that armored spikes impart. In life, the reptile probably looked something like the girdled lizards that scurry around the African deserts today, although the two are not related.