Roughly three-quarters of the Earth's surface is covered with water. As I stand on a beach in Hawaii and look out over the vast, blue expanse in front of me, I am overwhelmed by the immensity of the Pacific Ocean. My brain wrestles with numbers far beyond its capacity to visualize. In that moment, it is incomprehensible that even seven billion humans could deplete such a boundless and unimaginable resource. Yet, I know that we are. We are emptying the oceans of their fish, one species at a time. 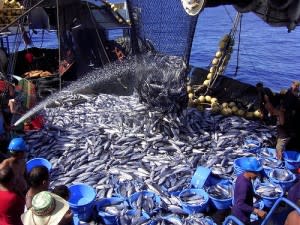 Today, 85 percent of the world's fisheries are either fully exploited, overexploited or have already collapsed. Combined, the world's fishermen catch 2.5 times the sustainable number of fish every year. Scientists predict that if current trends continue, world food fisheries may collapse entirely by 2050. "We are in the situation where 40 years down the line we, effectively, are out of fish," explains Pavan Sukhdev, special advisor to the UN Environment Programme. What we need are better management strategies. Now, researchers from the Center for Ocean Solutions at Stanford University are turning to the past for advice. Loren McClenachan and Jack Kittinger used historical records to reconstruct fish catches for the past seven hundred years to see if earlier civilizations did a better job than we are at managing their fisheries. The authors were able to characterize historical catch rates in the Florida Keys and Hawaii by reviewing a variety of historical sources, including species-specific catch records from the 1800s and archaeological reconstructions of population densities and per-capita fish consumption. "Seven hundred years of history clearly demonstrate that management matters," said Loren McClenachan, co-author of the study and assistant professor of environmental studies at Colby College. In Florida, fisheries were characterized by years of boom and bust through sequential collapse of high-value species, many which are still endangered or extinct today. The Keys fisheries were set up for failure - unlike other historical island communities, the Keys were highly connected to other markets, increasing fisheries demand. Furthermore, they have historically lacked a centralized management system. But, while fisheries in the Florida Keys have always been poorly supervised, fisheries in Hawaii were once far better than they are today.

"Before European contact, Native Hawaiians were catching fish at rates that far exceed what reefs currently provide society," said Kittinger, co-author and early career fellow at the Center for Ocean Solutions. Native Hawaiians pulled in over 15,000 metric tons of fish per year, and these high yields were sustained over several hundred years, despite a dense Hawaiian population. "These results show us that fisheries can be both highly productive and sustainable, if they're managed effectively." Much of the management system in Hawaii was tied to class and gender. For example, most offshore fishing was done by a professional fishing class who were familiar with their local environment. If they wanted to fish, they had to ask their chiefs, who regulated the fishing gear and canoes. The most valuable (and vulnerable) species like turtles and sharks were reserved for high chiefs and priests, reducing fishing pressure. The key to the Hawaiian's success lay in using a diverse suite of management measures. Many of the methods they used are similar to strategies employed in fisheries management today, including protected areas, community-based management, regulation of gear and effort, aquaculture, and restrictions on vulnerable species. Perhaps the greatest difference between management then and now, however is that in native Hawaiian society, rules were strictly enforced. "Rules were accompanied by robust sociocultural institutions," the authors write. The ancient Hawaiians did not hesitate, and punished transgressors with corporal punishment. "Clearly, we don't recommend this," said Kittinger, "but it's easy to see there's room to tighten up today's enforcement efforts." 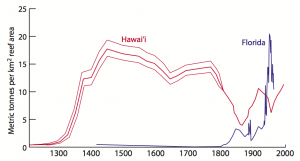 Other differences exist as well. For example, while aquaculture was used by the native Hawaiians, these fishponds were maintained for different reasons than we farm fish today. Fishponds did not contribute substantially to total fish production, but instead served as food security during tough times. As such, Hawaiians stocked fishponds with very different species than modern farms. Fishponds contained small, algae-eating species, requiring little from the sea to support them. Modern aquaculture, in contrast, relies heavily on wild-caught feeder species to support lucrative, luxury species like salmon. Five pounds of wild-caught fish are needed to produce one pound of farmed salmon, and instead of acting as a backup for when wild fish are scarce, fish farms make up a whopping 50% of our consumed fish production. Kittinger and McClenachan hope that understanding successful management strategies by historical societies will lead to better management of our current resources. "The evidence we present from historical reconstructions shows that reef fishery sustainability has been achieved in the past," they write, "which can guide actions for a more sustainable future for reefs and the communities that depend on them."