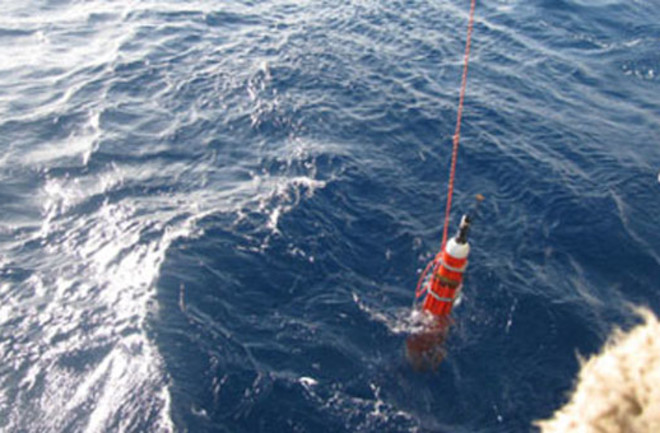 After five years of research and three months of testing off the islands of Hawaii, scientists say the first underwater robot explorers powered solely by the ocean are ready for use. So far, all vehicles exploring the depths of the oceans have faced the possibility of running out of fuel, which made scientists wonder if there was any way that the ocean itself could power the vehicle. The answer came in the form of the Sounding Oceanographic Langrangrian Observer Thermal RECharging vehicle (or SOLO-TREC, for short)--a vehicle driven entirely by the natural temperature differences found in the ocean. The vehicle, a joint project involving NASA, the U.S. Navy, the Scripps Institution of Oceanography, and the University of California at San Diego, completed its testing phase successfully, and scientists hope it can soon be deployed for research projects around the world. Researchers say

this technology breakthrough could usher in a new generation of autonomous underwater vehicles capable of virtually indefinite ocean monitoring for climate and marine animal studies, exploration and surveillance [PhysOrg].

NASA's Jack Jones says the fact that the robot just keeps going and going, like an aquatic Energizer bunny, brings humanity a little closer to an impossible dream:

"People have long dreamed of a machine that produces more energy than it consumes and runs indefinitely.... While not a true perpetual motion machine, since we actually consume some environmental energy, the prototype system demonstrated by [NASA's Jet Propulsion Laboratory] and its partners can continuously monitor the ocean without a limit on its lifetime imposed by energy supply" [CNET].

SOLO-TREC works by harvesting temperature changes within the oceans’ waters as it moves vertically between warmer, shallower waters and the colder depths. Ten tubes filled with waxy substances called phase-change materials are crucial to its operations.

When the water is warm, the substance melts and expands; when it’s colder, it solidifies and contracts. The expansion of the wax pressurizes oil stored inside the float. This oil periodically drives a hydraulic motor that generates electricity and recharges the vehicle's batteries [PhysOrg].

These batteries then power the float's hydraulic system, which changes the robot's buoyancy and allows the float to move vertically, and also power the explorer's on-board systems like GPS and communication devices. Since November, using only the energy generated by the ocean, SOLO-TREC has completed more than 300 dives, reaching depths of 1,640 feet. The JPL/Scripps team now plans on using the robot explorer for a variety of projects, with Russ Davis, a Scripps oceanographer, saying: "With further engineering refinement, SOLO-TREC has the potential to augment ocean monitoring currently done by the 3,200 battery-powered Argo floats"

The international Argo array has been used to measure temperature, salinity, and velocity across the planet’s oceans. Here's a map of SOLO-TREC's journey off the waters off Hawaii: