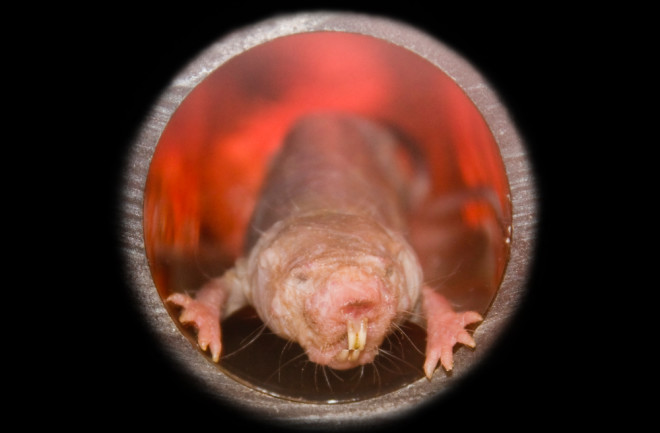 The Romantic Period of the early 1800s was marked by a morbid fascination with mortality and death. Poets, novelists and other artists tackled the eternal void head on, rather than whisking such dark topics under the proverbial rug. With death in vogue, even mathematicians took a stab on the beauty of ceasing to be.

In 1825, British autodidact Benjamin Gompertz found the risk of death increases exponentially with age. After the age of 30, his depressing model shows, the risk of dying on any given day churns upward at a constant clip. When you crunch the numbers, a human's risk of death doubles every 8 years along this mortal coil.

It’s known as the Gompertz-Makeham law (William Makeham is credited with adding the age-independent component to the equation), and it’s thought to apply to all mammals after they reach adulthood. But one homely critter laughs in the face of Gompertzian math: the naked mole rat.

Naked mole rats are adorably ugly creatures that challenge what we think we know about aging. There’s a strong correlation, for example, between the size of an animal and its expected lifespan.

A tiny hamster can live 3 years or so on average, while a lumbering elephant can live well past 50 years of age. One would expect the naked mole rat, weighing in at just 35 grams, to at most live 6 years or so—similar to a rat.

But naked mole rats can live to be 30 years old. Further, female mole rats show no signs of menopause, and remain highly fertile even into their final years of life. Neurogenesis in naked mole rats continues over two decades, and their hearts and bones don’t seem to change significantly over time. They rarely get cancer. Hell, they can even live up to 18 minutes utterly deprived of oxygen.

When the world is an ashen wasteland, there’s a good chance naked mole rats will still be around to keep the cockroaches company.

At Google’s biotech company, Calico, in San Francisco, California, biologist Rochelle Buffenstein is looking to the naked survivors to unlock their secrets of aging. She’s been working with the animals for more than 30 years, and has amassed a trove of data about their lifespans. Buffenstein says naked mole rats violate to the Gompertz-Makeham law, and she has over 3,000 data points to back her conclusion. After reaching adulthood six months into their lives, a naked mole rat’s mortality risk remained the same for the rest of its days her analysis revealed.

Rather than grow exponentially, a naked mole rat’s risk of death on any given day, no matter their point in life, hovered around 1 in 10,000. Surprisingly, their mortality risk even fell a little when they grew very old. In this sense, Buffenstein writes, naked mole rats have established themselves as “a non-aging mammal.”

“This life-history trend is unprecedented for mammals,” Buffenstein and colleagues wrote in a study published recently in the journal eLife. Still, it’s probably too early to proclaim naked mole rats ageless wonders.

For one, fewer than 50 of the mole rats in Buffenstein’s study lived past 15 years of age. Many of the animals were killed for research, or moved to another lab. For what it’s worth, the oldest mole rat in Buffenstein’s lab is now 35. Scientists will need to study a lot more geriatric mole rats to see if the mortality risk does indeed remain fixed across a larger population.

Perhaps mole rats do age in the Gompertzian sense, but it occurs much later in their life? Or their aging process is just different, and doesn’t fit into a widely accepted model? Though questions remain, in speaking with Science, Buffenstein says the numbers tell the whole story.

“If you look at any rodent aging study, a hundred animals is all you need to see Gompertz aging,” she told Kai Kupferschmidt of Science. "Here we have 3,000 data points and we're not seeing it.” For the naked mole rat, age is just a number, and the numbers seem to support such a claim. Long live the naked mole rat!