Mysterious Species May Have Interbred With Humans 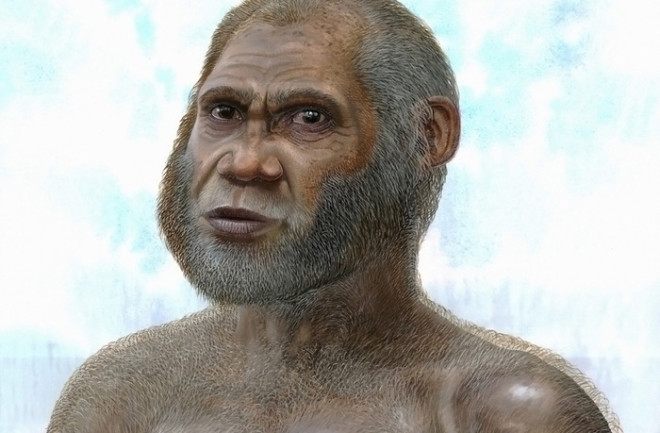 An artist's depiction of what a member of the Red Deer Cave people may have looked like. (Credit: Peter Schouten) The history of human evolution keeps getting more complicated. Researchers this week announced the discovery of a thigh bone that could serve as evidence of a new branch in the our family tree. The femur was dated to around 14,000 years ago, challenging the notion that other species of ancient humans died out after modern humans appeared. Instead, this find suggests that our distant cousins may have co-existed with several other species of hominins for quite some time.Area Known For Archaeological Finds The femur was unearthed in Red Deer Cave, which is located near the southwest Chinese city of Maludong. The cave is named after the extinct species of deer the ancient cave's inhabitants may have once hunted. In 2012, researchers discovered well-preserved skulls with a curious mix of ancient and modern features in the cave. The area around the cave has also produced revolutionary finds, such as the discovery of another possible species earlier this year in the nearby Longlin cave. Here's what we know about the cave's ancient inhabitants: The Red Deer Cave people had prominent brow ridges, no chins and thick skulls, much like Neanderthals, but also possessed frontal lobes reminiscent of modern humans. The odd combination of features suggested to researchers that they had found a completely new species. "In short, they're anatomically unique among all members of the human evolutionary tree," said Darren Curnoe, an evolutionary biologist and a co-author of the study, in an interview with National Geographic. The discovery of the femur strengthens researchers' theory that the remains discovered at Red Deer Cave belong to a completely new species. The bone is dated to around the same time period as previous finds in the area, yet looks very similar to bones from Homo habilis, a species that died out 1.5 million years ago. Debate Still Ongoing The apparent contradiction has caused controversy among scientists, some of whom argue that the Red Deer Cave people do not, in fact, represent a new species. Instead, they believe that they are simply another variation of modern humans, who have been shown to possess a wide range of features. Difficulties in extracting DNA from the Red Deer Cave bones has made the dispute hard to resolve. Another theory holds that the Red Deer Cave people are a hybrid of modern humans and a more ancient species, indicating that our ancestors interbred with other species. Yunnan province, the region of China where the remains were discovered, is also home to other unique species due to its geographic isolation and the presence of natural boundaries such as mountains, valleys and rivers. The Red Deer Cave people could have migrated out of Africa with other hominins two million years ago and remained tucked away in their remote homeland away from other species, allowing them to survive for much longer as a distinct species. The controversy over the Maludong discovery mirrors the dispute over another human ancestor that likely existed in the same time period,

Found in 2003 in Indonesia, H. floresienses stood between three and four feet tall and possessed many characteristics that differentiated them from modern humans, such as their lack of a defined chin. At the time of their discovery, there was an intense debate centered on whether they were distinct enough to merit their own species. Today, it is largely accepted that the specimens do make up an entirely new species. It seems that modern humans had a few contemporaries. Why our species ended up on top is still a measure of some debate, but it is a question worth pondering. If things had gone differently, we all may have ended up looking like this.