My First Visit to the Seafloor

A researcher’s first excursion to the bottom of the ocean leaves a lasting impression. 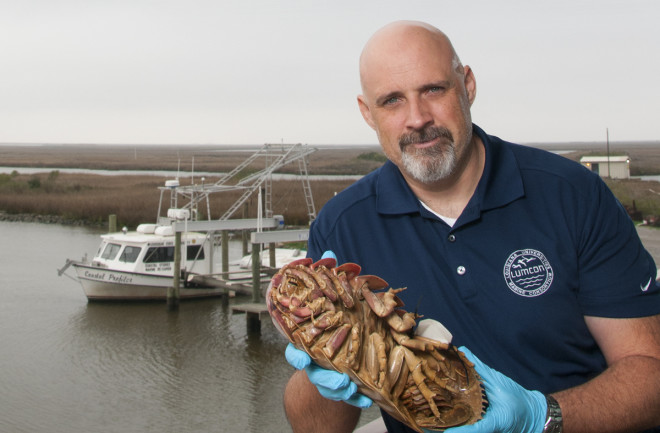 Craig McClain holds a giant isopod specimen similar to the one he saw on the ocean floor during his first deep-sea dive. (Credit: Ernie Mastroianni)

Craig McClain is no stranger to what lurks in the belly of Earth’s oceans.

The deep-sea biologist is currently executive director of the Louisiana Universities Marine Consortium. Throughout his career, he‘s tackled many questions about aquatic life, from how food availability affects species to how marine environments impact an organism’s size.

Searching for those answers, he’s crossed paths with beasts like the giant isopod, a crustacean that, according to McClain, “is essentially just a roly-poly that‘s double the size of your shoe.” To see his subjects up close, McClain hops a ride in a submersible, a 23-by-8-foot research vessel designed to withstand the enormous pressure at seafloor levels. But before he was heading up labs and leading his own dives, McClain was a rookie. Here, he recounts his first, surreal deep-sea dive in the Bahamas.

It’s the summer after my first year of graduate school, and I’m with a pilot, a sub tech and two deep-sea biologists. One is Craig Young, now the director of the Oregon Institute of Marine Biology, and the other is Paul Tyler. And Paul Tyler literally wrote the book on deep-sea biology. It’s literally called Deep-Sea Biology. These guys, in my field, are famous. So not only is it my first research trip and my first submersible dive, I’m with two people I have science crushes on.

They launch us off the back of the ship, and we’re diving down, and there’s this tiny porthole, maybe 5 or 6 inches across. Sitting naturally, it’s down by my hip, so I have to get into a yoga position to get my face down and actually look out of it. The porthole faces out to the side, so Paul has them swing the submersible around so my portside window now looks toward what they’d been looking at in the front.

As I’m going down, every now and then, I get a glimpse of a fish. This is before there was a lot of deep-sea video on the web, so my only encounters with deep-sea organisms had been in jars, on a lab shelf, or photos or pictures, which were largely grainy. This is my first experience seeing true color. I don’t want to move my face away from the porthole because I want to see everything.

But the biggest thing for me is getting to see a giant isopod, which has always captured my imagination, attention and interest. We’re cruising along the seafloor, and I look over and see one swimming. Here it was, nonchalantly swimming past the submersible. I know these are real animals, and I know that this is occurring, but I can’t believe this is actually happening, really in the moment.

[This article originally appeared in print as "Deep Dive."]