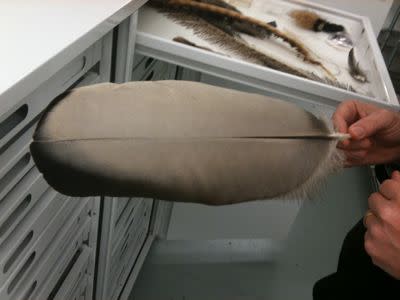 A few months back I took the train to New Haven to learn about feathers. I sought out an ornithologist at Yale named Richard Prum in his office. As soon as I walked in, he promptly picked up a manila envelope from his desk. Out of it he drew what looked like the black wooden handle of a long paint brush. “What is that?” I asked. “It’s a quiz,” he said. “You tell me.” “A feather?” I guessed. “This is a cassowary wing feather,” Prum said. Cassowaries are flightless birds that live in Australia and New Guinea. It was hard to imagine how the stick in Prum’s hand could belong to a bird, so he led me down a hallway to the Peabody Museum’s ornithology collection. We entered a room mostly taken up with white steel cabinets that reached up to the high ceilings. On a wall shelf stood an assortment of exotic stuffed birds. The turkey-sized cassowary was covered mostly in dark downy feathers. But on its wings were black paint brush handles, hanging down like a row of ebony icicles. Prum had more feathers to show off. He pulled open a cabinet drawer and drew out a tail feather of a superb lyrebird, a pheasant-like bird from Australia. “There’s a huge amount going on here,” he said. “It’s pretty crazy.” After the sleek minimalism of the cassowary feather, the lyrebird feather was a jolt of decadence. It measured two feet long, curving gracefully away from Prum before snapping back at its tip. The feather was striped, although the word striped didn’t do the pattern justice. Bars of color streaked across the feather, starting out as a shade of cinnamon on one side and ending in jet black on the other. Between the stripes, the feather was practically transparent. Prum invited me to look closely at the feather to see how the lyrebird creates the illusion. From its main shaft, called the rachis, thousands of filaments called barbs branched off. In some parts of the feather, the barbs were hollow tubes. In other parts, they took on color and sprouted tiny hooks that merged into a dense network. Beauty is the sole mission of the lyrebird tail feather. To attract females, male lyrebirds wave tailsin a ritual dance. But feathers that don’t serve to seduce also have their own kind of beauty. Rummaging through another drawer, Prum found a paddle-shaped wing feather from a great grey owl. The underside was made up of smooth ridges. But the top was covered in a luxurious mat that felt like velvet. “That’s for silence,” Prum said. “The idea is that it reduces turbulence so that owls can sneak up on their prey. For military purposes, people have thought about it. But most of it’s classified.” Not all birds use feathers to fly; some use them to swim. Out of another cabinet, Prum hoisted the entire body of a king penguin. He curled one arm around the bird’s belly, and moved his free hand over its flipper-shaped wings. They were covered in miniature feathers, each the size of a peppercorn. They had the look and feel of fish scales. Prum spends a lot of time investigating where feathers get their colors. Some of their colors come from pigments, the same way our hair and skin get theirs. The pigments absorb most wavelengths of light, and reflect only certain colors. But birds also use some sophisticated physics to get extra colors. Prum showed me one of his favorite examples: the opal-crowned manakin from Ecuador. The tiny bird amply earns its name. Its head glitters as if its feathers were cut from stone. Prum and his colleagues have discovered that the crown feather color is produced by tiny air pockets in the feathers. The pockets, each measuring a few billions of an inch across, are arranged like oranges stacked in a crate. As light travels through them, the photons bounce off their walls. They force photons of certain frequencies to cancel each other out. At other frequencies, the photons boost each other, amplifying their color. The result is the glittering hue of the manakin’s head. The bird’s resemblance to opals is no coincidence. An opal stone is made up of tiny balls of silica, which are also packed like oranges in a crate. The stone also boosts and squleches photons in the same way. “This,” Prum said, holding up the bird, “is an inverse opal. It’s the same shape, but with air spaces instead of silica balls. And it makes the same effect. This is nanotechnology, basically.” Unlike manmade nanotechnology, however, feathers are not the work of scientists and engineers. They're the product of hundreds of millions of years of evolution. In the February issue of National Geographic, I take a look at feathers, both in their current splendor and in their bizarre history--a history that may extend a lot further back than you'd think. Check it out, and also check out the marvelous photographs of Robert Clark, who traveled to China, Montana, Europe, and other places to capture their past and present beauty. [Photo credit: The much more ordinary photo above is by me]