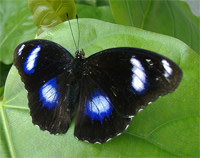 The drawers of the world's museums are full of pinned, preserved and catalogued insects. These collections are more than just graveyards - they are a record of evolutionary battles waged between animals and their parasites. Today, these long-dead specimens act as "silent witnesses of evolutionary change", willing to tell their story to any biologist who knows the right question to ask.

This time round, the biologist was Emily Hornett, currently at UCL, and her question was "How have the ratios of male butterflies to female ones changed over time?" You would think that the sex ratios of insects to mirror the one-to-one proportions expected of humans but not if parasites get involved.

The bacterium Wolbachia is arguably the world's most successful parasite, infecting around 20% of all insects, themselves an extraordinarily successful group. It can infect eggs but not sperm, which means that females can pass the bacteria on to their offspring, but males cannot. As a result, Wolbachia has it in for males - they are evolutionary dead-ends, and the bacterium has many strategies for getting rid of them. It can kill them outright, it can turn them into females and it can prevent them from mating with uninfected females. As a result, populations infected with Wolbachia can be virtually male-free.

To study the effect of Wolbachia on butterfly populations, Hornett (great name for an entomologist)turned to collections of the blue moon butterfly (Hypolimnas bolina). This beautiful species was heavily collected by entomologists between 1870 and 1930 and their efforts have stocked the museums of the world with specimens. While these were long dead, Hornett found that many of them contained viable DNA and she used them to develop a genetic test for Wolbachia infections.

She validated her Wolbachia test by using butterflies collected by the entomologist H.W.Simmons in Fiji over 70 years ago. Simmons carefully recorded the numbers of males and females in his butterflies and noted some very unusual all-female brood. Sure enough, Hornett confirmed that only mothers who tested positive for Wolbachia produced these skewed clutches, while those that were infection-free gave birth to the standard bisexual broods.

Satisfied that her test was accurate, Hornett cast her net further. She looked at specimens collected from five populations of blue moon butterflies collected from the Phillippines, Borneo, Tahiti, Fiji and Samoa between 73 and 123 years ago. The butterflies are well studied to this day, so Hornett could compare the proportion of Wolbachia infections then and now. In butterfly time, this represents a gap of 500 to 1000 generations separating the specimens from their modern descendants.

The results show that the butterfly and the bacterium have been engaging in a heated evolutionary battle throughout the Pacific. The male-killer's dominance has fluctuated greatly, rising in some areas and falling in others, while the butterfly has repeatedly evolved to resist its sex-skewing antics.

Among the historical populations, only the Philippine group had a high proportion of infected males - a sign that they had developed a resistance to Wolbachia, which has been maintained to this day. In Borneo, the butterflies have evolved resistance over time - collectors didn't capture a single infected male in 1878 (or indeed, very many males at all), but such individuals are commonplace now. This rise of resistance parallels the real-time events that Hornett, together with Emily Dyson and Greg Hurst documented in Samoa a couple of years ago.

Only Viti Levu in Fiji ha actually managed to avoid Wolbachia infection, rather than simply shrugging it off. In 1886, 45% of the population were infected, but this climbed to 92% by 1934, before falling back to 59% by modern times. Remarkably, this trend mirrors notes written by field biologists studying the butterflies over the years. In 1888, Mathew counted 2 females for every male. In the 1920s, at the height of the infection, Poulton estimated 12 females to every male, while modern counts have returned to a two-to-one ratio.

Elsewhere, the bacterium's fortunes have been better. On the Polynesian islands of Ua Huka and Tahiti, the male-killer was either absent or rare in historical populations (again, supported by written records) but common today. Unsurprisingly, male blue moon butterflies are a rarity in these places.

This isn't just a matter of nebbish census-taking - the dominance of male-killer infections can have drastic consequences for their hosts' biology. For a start, the absence of males would dramatically shrink the population size, reducing its genetic diversity and leaving it ill-prepared to face future environmental changes, or even others predators or parasites.

The results portray a geographic mosaic of infection and suppression, across the entire Pacific. The migration of butterflies from island to island may help to spread beneficial adaptations to populations that need it. Indeed, the suppressive ability that has protected the Philippine males for over a century may have contributed to the resistant populations of Samoa and Borneo. Perhaps in time, Tahiti and Ua Huka will benefit too.

Hornett's work also shows that the balance of power can shift very dramatically between a host and its parasite over a relatively short span of time. In fact, these cycles may happen so rapidly that many may be completely invisible to us - a pattern of sex distortion that stays invisible because we aren't looking quickly enough.

Fossil-hunters can glimpse the threads of evolution by looking at the bones of ancient animals and look at how they differed from their modern relatives. That tells us about evolution on geological time-scales, spanning millions of years. But museum specimens can act as fossils of a sort, offering a peephole on evolutionary changes over a much shorter and more contemporary scale.

More on Wolbachia and male-killers: