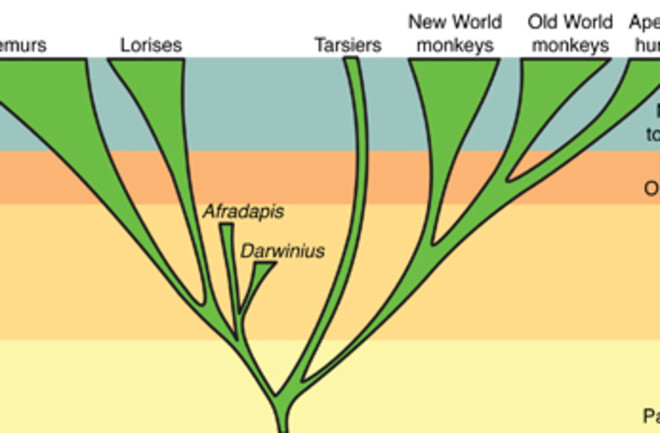 Surprise, surprise. An independent analysis of the primate fossil that was unveiled amid extraordinary hype last May has found significant evidence that the lemur-like creature was not a direct ancestor of humans, after all. The 47-million-year old fossil described in May, which was given the scientific name Darwinius masillae and nicknamed Ida, was

announced with unrestrained razzmatazz. She was the "eighth wonder of the world", "our Mona Lisa" and an evolutionary "Rosetta Stone", according to the researchers who unveiled her.... She was, they said, the "link" between us and the rest of the animal kingdom [The Guardian].

But Ida, who was the subject of both a book and a TV special that were released at the same time as the scientific paper describing the fossil, failed to wow many evolutionary biologists. Says Erik Seiffert, lead researcher of the new study:

''The suggestion that Ida [was]... specifically related to the higher primates, namely monkeys, apes and humans, was actually a minority view from the start. So it came as a surprise to many of us who are studying primate palaeontology" [BBC News].

Seiffert's new analysis began with his attempt to identify another fossil primate, Afradapis longicristatus, which he found to be a close relation to Darwinius. The researchers then

The analysis showed that both primates are located on

an early twig of the branch that produced lemurs, and far from the lineage that spawned monkeys and great apes [Wired.com].

What's more, the researchers say that both species have no modern descendants. The new study, published in Nature, challenges the previous notion that Darwinius was an important part of our lineage. The previous researchers had singled out features in Ida's face, teeth, and feet that were similar to those seen in higher apes, but the new research team argues that these features may be a result of "convergent evolution."

The researchers involved in the Darwinius work stand by their findings, and still maintain that Ida is a find of spectacular proportions. They also note that

the Darwinius skeleton is much more complete than Afradapis and shows additional higher primate characteristics not available for analysis on Seiffert's fossils, such as bones in the foot [The Scientist].

But Seiffert says that Darwinius played no role in the origins of man, and is much more closely related to lemurs and lorises. Says Seiffert:

Related Content: 80beats: A Fossil Named Ardi Shakes Up Humanity’s Family Tree The Loom: Ardipithecus: We Meet at Last 80beats: Did a Strangely Human-Like Primate Give Rise to Monkeys, Apes, and Us? The Loom: Darwinius: it delivers a pizza, and it lengthens, and it strengthens, and it... Image: E.R.Seiffert, Stony Brook University