Movies of life show the dance of dividing cells 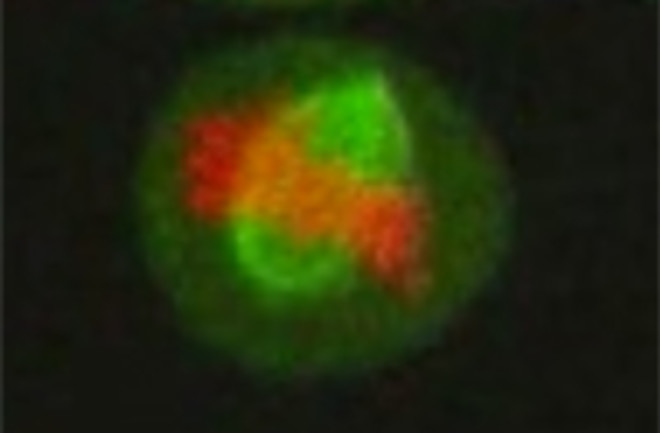 Imagine filming a movie hundreds of thousands of times with an infinitely patient crew. Every time you shoot it, you remove just one thing, be it an actor, a line of dialogue or a crew member. By comparing the resulting films, you’d soon work out which elements were vital to the movie’s success, and which could be lost without consequence. Beate Neumann, Thomas Walter and a group of scientists known as the Mitocheck Consortium have taken just such an approach to better understand one of the most fundamental processes of life. Some directors employ inanimate objects like Keanu Reeves, but Neumann and Walter wanted to work with far more dramatic stars – DNA, proteins and the like. Their task was to work out which genes were vital for the process of mitosis, the immensely complicated operation where one cell divides into two. To do that, they systematically went through each of the 21,000 or so genes in the human genome and inactivated them, one by one, in different cells. They then filmed these subtly different actors as they divided in two. This incredible library of around 190,000 films, all shot in time-lapse photography, is publicly available at the Mitocheck website. It's a treasure trove of data, whose doors have been left for the entire scientific community to walk through, and no doubt they will. Name a gene, any gene, and with a couple of mouse clicks, you can find a movie that shows you what happens when it’s knocked out. You can work out if your favourite gene is essential to cell division, and you can even find other genes that have similar effects. The study’s leader Jan Ellenberg says, “The response of human cells to silencing each gene is already pre-recorded and scientists can simply log in to our database to check the result, rather than spending weeks or months of time in the laboratory to obtain the data.” The movies are certainly useful, but they are beautiful in their own right. For a daily and microscopic process, mitosis is an astonishingly beautiful dance. It begins with cells creating the right number of partners, by duplicating all of their chromosomes. At first, the dancers haphazardly mingle with each other but as things get underway, they separate and line up in a neat row. Then, dramatically, they shimmy across to opposite ends of the room, following long spindles of protein. Once the partners split up, the cell pinches down its middle and separates them forevermore. Without this courtly dance, you would never have been anything more than a fertilised egg. Life simply wouldn’t work. Clearly, mitosis already has all the makings of a good drama. Neumann and Walter just needed to develop the right filming techniques. To prep their actors, they used short RNA molecules designed to silence individual genes. To sort out the cinematography, they set their microscopes to automatically record time-lapse movies as soon as the nullifying RNA molecules were introduced into cells. Finally, to get the lighting right, the duo labelled all the chromosomes in their cells using proteins that glow in the dark. The video below shows mitosis working normally, when no genes have been silenced. Each cell is green and its chromosomes are decked out in red. It’s all very festive. Two days are condensed into 36 seconds, and two cells become eight. Once things happen, they happen very quickly, so the series of screengrabs below the video shows what happens to the bottom cell.

This next video shows the chaos that ensues when a single gene called OGG1 is turned off. No longer is mitosis the orderly tango of before; this is more like a rave. Cells fail to separate properly, leaving multiple bundles of chromosomes jangling about in the same space. Just look at what happens at 00:16.

For each inactivated gene, Neumann and Walter shot footage of around 67 cells over the course of two days, capturing an astonishing total of 19 million cell divisions. Analysing so much data would be unfeasible for a human scientist, even a graduate student, so that work fell to computers. The group created a program that analysed all their footage. Whenever mitosis wasn’t quite happening in the usual way, the program flagged the video, and even grouped together genes that had similar effects. In the end, Neumann and Walter identified 572 genes that play a role in mitosis and less than half of these had been linked to the process before. The rest were new, and they reveal just how much we still don’t know about this most fundamental of processes. To check that their new candidates are actually involved in mitosis, the team shoved the mouse version of each gene into the deficient cells. The mouse versions are different enough from ours that the silencing RNA molecules ignored them, but similar enough that they managed to restore some decorum to the disordered mitotic dances. These sorts of experiments are crucial because RNA-silencing experiments can sometimes go astray if the molecules deactivate genes other than their designated targets. So the researchers have a list of 600 or so mitosis genes. The movies provide a rough idea about what these players do and which stages of mitosis they influence. Now, the real work begins in trying to pick apart their individual roles. If there is one caveat to this study, it’s that it was done in HeLa cells, an immortal line of human cancer cells that’s commonly used in laboratory work. Being cancerous, HeLa cells already have a few faulty genes. Their style of cell division might not quite represent the “normal” situation and it’s important that the team confirms their results in other cell lines. But already, the sheer scale of the data that have been collected is a tremendous boon to scientific research. There implications for cancer alone are huge. Cancer cells divide all too often and many cancer drugs are designed to stop them from doing so. Scientists could use the Mitocheck data to find new targets for tomorrow’s drugs or to better understand how existing drugs work. They could also work out the genetic differences that cause cancer cells to divide differently from normal cells. “Now that we have narrowed down the gene set relevant for cell division to about 600, we can systematically investigate those differences in a number of different cell types, which would not be possible across the entire genome,” says Ellenberg. Even cell division is just the tip of the iceberg. The movie library also contains shots of cells growing, moving and dying and they can be used to understand the genes that underlie these processes too. The Mitocheck team are even working on next-generation technologies that will allow them to watch proteins interacting in living cells, revealing the dances of not just mitotic chromosomes but of all a cell’s molecular characters. For years to come, scientists will be watching, poring over, and adding to the movies that have been unveiled today. There has surely never been a more informative or intimate video collection of our lives. Reference: