The year seems to have been sent to us from the depths of Hades, so what better way to usher it out than with images of that sulfurous realm's manifestations? 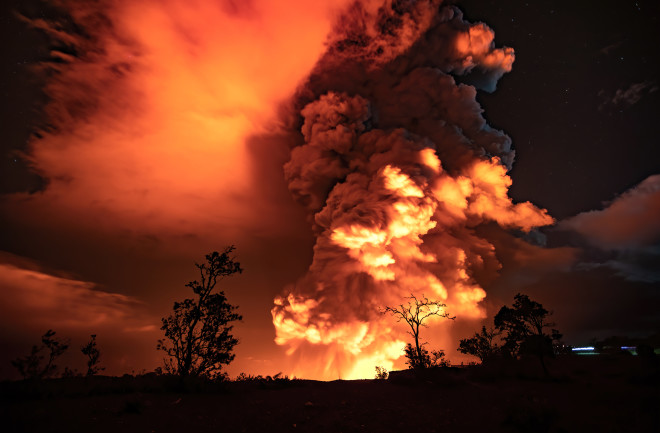 At the end of the season finale of his Last Week Tonight show, John Oliver ventured out of his makeshift studio and stood in front of a giant "2020" sign. He noted just how horrible the year had been and then held up what appeared to be a detonator.

As I watched on television, John Oliver sent 2020 out with bang during the season finale of Last Night Tonight on HBO. (Credit: iPhone photo of my TV screen)

Then he pressed a button, igniting the 2020 sign to send the year out with a massive, cathartic explosion.

That was back on November 16th, and it was a wonderful way to begin ushering out 2020 — a year that really did seem to be sent to us directly from Hades.

Now, as the year finally does come to a close, I thought I'd focus on the ways that Mother Nature easily has one-upped John Oliver. Namely, with giant plumes of poisonous gas, roiling lava lakes, and towering lava fountains, plus other manifestations of volcanic activity.

That will really help us send 2020 packing with an even bigger cathartic bang.

Let's start with images of an eruption of Kīlauea Volcano on the Big Island of Hawaii. (Note: My fellow blogger here at Discover, Erik Klemmeti, offers some of the gory geologic details at his excellent Rocky Planet blog.)

As the National Park Service describes the action:

"Shortly after approximately 9:30 p.m. on Sunday, December 20, the USGS Hawaiian Volcano Observatory (HVO) detected glow within Halemaʻumaʻu crater at the summit of Kīlauea Volcano. The water lake that had existed at the summit of Kīlauea since 2019 soon boiled away as an effusive eruption commenced. Three initial vents in the wall of Halemaʻumaʻu crater cascaded lava flows into a growing lava lake at the base of Halemaʻumaʻu."

Halemaʻumaʻu's new lava lake on the Big Island of Hawaii's Kīlauea Volcano, as seen in an animation of webcam thermal images. (Credit: USGS)

You can see lava roiling and boiling in the animation of thermal images above, captured by a U.S. Geological Survey webcam starting on December 29th.

If that doesn't quite float your boat (on a lava lake? 😉), how about this?:

This time-lapse video was also acquired by a webcam on the rim of the Halemaʻumaʻu Crater, but this time without a thermal camera. A 24-hour period starting on December 29th repeats several times, showing a view of the lava lake in the crater during the daytime and at night.

While Kīlauea eruptions are not massively explosive like some other volcanoes, they still pose significant risks. "High levels of volcanic gas, rockfalls, explosions, and volcanic glass particles are the primary hazards of concern regarding this new activity at Kīlauea’s summit," according to the USGS.

The eruptions also are producing large amounts of volcanic gas, including sulfur dioxide. SO2 reacts in the atmosphere with oxygen, sunlight, moisture, and other gases and materials, resulting in fine particles that form volcanic smog. This "vog," as it is known, "creates the potential for airborne health hazards to residents and visitors, damages agricultural crops and other plants, and affects livestock operations," the USGS says.

The Kīlauea eruption sent a plume of that vog to the southwest, as seen in the animation above, which consists of imagery acquired by the GOES-17 satellite. (This imagery is courtesy of the Cooperative Institute for Meteorological Satellite Studies.)

Here's another view from space:

The image above was created by Pierre Markuse using data acquired by a Sentinel 2 satellite on December 23rd. You can see vog pouring out of the Halemaʻumaʻu Crater on Kīlauea. If you look closely, you may be able to detect a bit of a glow from the lava lake, which is made visible with the addition of infrared data.

The Lava Lamp Beneath Kīlauea

Kīlauea's relatively gentle style is typical of volcanoes resulting from plumes of molten rock rising from deep in the Earth's mantle.

To understand what goes on beneath "hot spot" volcanoes like this, visualize a lava lamp's rising bulbous blob of red stuff fed by a long, narrow thread. That's roughly what a rising plume of molten rock under a hot spot volcano looks like. When that bulbous blob reaches the underside of Earth's brittle outer crust, it melts the rock, creating magma that can erupt onto the surface. That's what's happening right now on Hawaii's Big Island — with more of a gentle oozing than huge, explosive paroxysms.

Since Kīlauea isn't particularly explosive, I still need to make good on what I wrote in the headline — that bit about 'sending 2020 out with a bang.' So here goes:

A continuing eruption of the Mount Etna volcano in Sicily, Italy, is seen in this Sentinel 2 satellite image acquired on December 23rd, 2020. The image is a little more than six miles wide. (Credit: modified Copernicus Sentinel data processed by Pierre Markuse)

Okay, it's true — this satellite image doesn't exactlly personify "explosiveness." But the volcano, Mount Etna in Sicily, Italy, is indeed much more unruly than Kīlauea.

The highest and most active volcano in Europe, it has been built up by a series of eruptions that began about 500,000 years ago. The latest series began in 2001. And the most recent explosive outburst, with associated lava flows, started on December 14th.

In the Sentinel 2 image above, captured on December 23rd, lava flows are clearly visible, once again thanks to infrared data.

With the latest eruptions, lava fountains shot 300 feet high, and a dense, acrid plume of ash soared three miles into the atmosphere. Loud roars were reportedly heard by people living nearby, and earthquakes also were recorded.

Mount Etna's volcanism is associated with the subduction of the African tectonic plate under the Eurasian plate. As material from the African plate plunges into the mantle, it melts, sending molten rock rising toward the surface. And in the case of subduction zone volcanoes like Etna, the resulting eruptions can happen quite explosively.

People from around the world took to Twitter to say that Etna's latest tantrum was yet another way that 2020 sought to torture people.

But you could also look at it differently: It was Mother Earth setting off fireworks to help us ring out the old, and ring in the new.

"The year is going, let him go; Ring out the false, ring in the true.”

And with that thought, let me wish you a very Happy New Year! I hope 2021 will bring you and your loved ones good health, happiness, and peace.