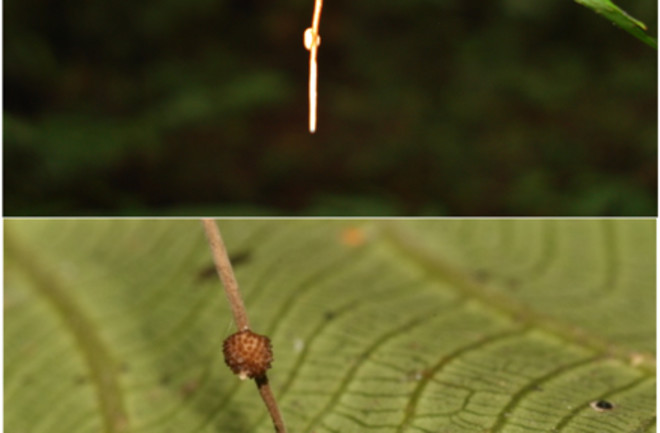 It's time to pay another visit to Cordyceps, the fungus that turns its hosts into spore-sprouting zombies. The fungus, which can be found in many parts of the tropics, penetrates an insect's exoskeleton and then work its way into its host's body. At first the ant seems normal to the human eye, but eventually it makes its way to a leaf, where it clamps down with its mandibles. Cordyceps then sprouts out of the ant's body, lashing it to the leaf's underside, and producing a long stalk tipped with spores. The spores can then shower down on unfortunate insects below. David Hughes of Penn State University has been publishing a string of fascinating papers in recent years about this science-fiction-topping parasite. In 2009, I wrote about one study of his on the exquisite precision of the fungus's manipulations. He and his colleagues found that one species that lives in Thailand almost always causes infected ants to clamp onto a leaf vein about 25 centimeters off the ground--a spot where the humidity and other conditions may be ideal for a fungus to grow. When Hughes and his colleagues moved infected ants higher up into the canopy, the fungus ended up deformed. On the other hand, when the scientists moved the ants to the ground, the ants simply disappeared--devoured most likely by other animals or washed away by rain. Now Hughes is looking more closely at how the fungus pulls the strings on its insect marionette. First off, how does it drive the ant to its climatic sweet spot? The species of fungus that Hughes studies, Ophiocordyceps unilateralis, infects a species of ant, Camponotus leonardi, that usually stays 60 feet off the ground, living in the canopy of the Thai rain forest. It sometimes drops to the ground, but promptly walks a short distance along an ant trail to the nearest tree. Infected ants, by contrast, were beset by convulsions that caused them to fall out of trees. Instead of following a trail, they wandered the forest floor in random directions for hours, and then climbed up small plants instead of trees. Healthy ants are active from dawn to dusk, but Hughes and his colleagues could only find infected ants during midday. And they all became synchronized in their leaf-biting, typically clamping onto a leaf around noon. Hughes then took a close look at the death grip itself. In the hours before the zombie ants clamped onto a leaf and died, their jaws were in good working order. The ants could use their mandibles to clean off their antenna and legs without chomping them off, for example. Once the ants clamped onto leaves, Hughes dissected their heads and peered inside. They were full of fungal cells. He also observed that the muscles controlling the mandibles were atrophied. It's a bizarre finding, given that zombie ants typically have enough strength to pierce through a leaf vein. One possibility Hughes offers is that the atrophy sets in after the ants bite down, and it attacks the muscles that the ant might use to let go of the leaf. All in all, Hughes's research supports the idea that the ant becomes what Richard Dawkins has dubbed the extended phenotype of the fungus. The behavior of the host is not just a side-effect of having a bad fungal infection. It's a manipulation that lets the parasite reproduce more successfully. Still, Hughes has much left to figure out. Why, for example, do the ants pick leaves that point north northwest, for example? It may seem eerie that a fungus can work its zombification like clockwork, but other parasites can, too. A fluke that infects ants causes them to clamp grass blades at dusk. That timing works out nicely for the fluke, because it needs to get into grazing mammals like cows or sheep to complete its life cycle, and those animals like to graze when it's cool out. The fluke-infected ants even climb down at dawn so they don't bake in the sun, returning to the tops of the grass the next evening. Hughes doesn't know what's so special about noon for this fungus. But I'd bet that there's some eldritch horror in the answer. [Image: PLOS One, via Creative Commons Licence]