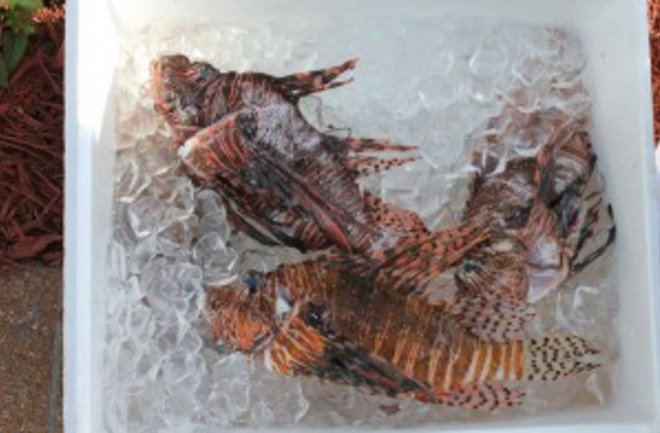 Lionfish I helped catch off the coast of Beaufort, NC in 2013. Photo by Christie Wilcox As I've described before, the Indo-Pacific lionfish in the Atlantic and Caribbean are quite possibly the worst marine invasion

These toxic predators have been eating their way around for the past few decades, driving down populations of native species and threatening already-struggling habitats. Now, a pair of papers released this month have more bad news: the lionfish are continuing to spread, and they may be eating the very last of critically endangered species. Lionfish have continued to move southward in their quest for Caribbean domination since their introduction off the coast of Florida. In 2004, Matthew Kimball and his colleagues predicted that they could get as far as Brazil based on thermal tolerances, and now, a decade later, they have. A new study published in PLoS ONE today describes the very first sighting of a lionfish off the coast of Brazil. The specimen was noticed by a group of recreational divers in May last year off Arraial do Cabo, explain the authors, which include the California Academy of Sciences' curator of ichthyology, Luiz Rocha. DNA testing confirmed that this individual was related to the invasive population and was likely not a new introduction.

"In Brazil, lower species richness, high endemism and consequent lower functional redundancy of reef fish assemblages suggest that a potential lionfish invasion will have even direr consequences than in the Caribbean reefs," the authors write in their conclusions. They recommend immediate implementation of a monitoring and remocal program in as many areas along the Brazilian coast as possible to prevent the worst-case scenario from unfolding. "For the past 20 years, invasive lionfishes have been restricted to the Caribbean," Luiz Rocha said in a press release. "This new record shows us that lionfishes are capable of reaching far into other areas of the Atlantic, and other countries should be on guard, preparing for them to arrive." Rocha was also the first author of a second paper released this month on lionfish. The article, published in Coral Reefs, makes note of lionfish eating a critically endangered wrasse from the inner barrier reef in Belize.

"We found 15 social wrasses in a single lionfish stomach," said Claudia Rocha, a molecular biologist with the California Academy of Sciences's Center for Comparative Genomics and co-author of the study. "We expected to see several, but the actual number was surprising." Together, these new studies serve to further push ongoing efforts to remove lionfish from their invasive range. “Invasive lionfishes are a powerful enemy to native reef species — many of which are already threatened by habitat destruction and pollution,” said Rocha. “Without natural predators, lionfishes are ‘top dogs’ on the reef. They can easily pick off small, naive reef fish, and do so with gigantic appetite.” The good news is, as I've explained before, lionfish are delicious. The next step is to encourage local retailers to sell lionfish meat, which will help fund removal efforts — an idea that seems to be catching on, as at least some Floridians can purchase the eco-friendly seafood at their local Publix.

Florida @Publix selling lionfish fillets!!! YES! My favorite dive capt shared this, so I am not sure where it is from pic.twitter.com/nWG7u5pDoO — Kelly Heber Dunning (@Kelly_Heber) April 16, 2015

The bad news is that these two studies provide further evidence that the lionfish are not only here to stay, they're going to have continued impacts on reefs throughout the Atlantic and Caribbean. And the ultimate consequences may be worse than we feared, as warming waters from global climate change will likely allow the invasive fish to colonize more areas than previously expected. If you want to do more for the planet (since it's Earth Day), why not eat a lionfish? Extra points if you catch and clean it yourself.