The realm of science-fiction has just taken a big stride towards the world of science fact, with the creation of a prosthetic arm that can be moved solely by thought. Two monkeys, using only electrodes implanted in their brains, were able to feed themselves with the robotic arm complete with working joints. 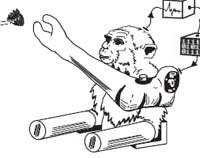 Bionic limbs have been fitted to peoplebefore but they have always worked by connecting to the nerve endings in the chest. This is the first time that a prosthetic has been placed under direct control of the relevant part of the brain.

The study, carried out by Meel Velliste from the University of Pittsburgh, is a massive leap forward in technology that lets the brain interface directly with machines. Previously, the best that people could do was to use a cap of electrodes to control the movement of an animated computer cursor in three-dimensional space. Velliste's work shows that signals from the brain can be used to operate a realistically jointed arm that properly interacts with objects in real-time.

The applications of the technology are both significant and obvious. Amputees and paralysed people could be kitted out with realistic prosthetics that afford them the same level of control as their lost limbs.

The fake arm that Velliste created is certainly a good step towards realism, and could rotate freely about the shoulder and flex about the elbow. Only the hand was simplified; the 'wrist' was fused and the 'hand' consisted of two opposing 'fingers'. Despite this claw-like tip, the monkeys learned to use the arm successfully and there were even signs that they came to accept it as their own.

Velliste implanted an array of 116 tiny electrodes into the part of each monkey's brain that controls movement- the motor cortex. A computer programme analysed the readouts from these electrodes in real-time and converted them into signals that moved the arm. All the while, the animals own arms were restrained, forcing them to rely on their surrogate limbs. 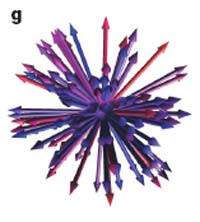 A deceptively simple programme analysed the monkeys' thoughts. Every one of the 116 electrodes was tuned to a particular direction in three-dimensional space. Every thirty milliseconds, the programme added up the directional preferences of any electrode currently firing, in order to work out where the monkey wanted the arm to end up. It then calculated a set of movement for the arm's joints to get it to the right position.

The monkeys' task was to reach a piece of food placed at random positions in front of them and bring it to their mouths. At first, they made large movements to get the arm in roughly the right place followed by small adjustments to home in on the target, be it the piece of food or their own mouths.

After training and two days of trials, the monkeys successfully grabbed and ate the food on 61% of their attempts. It's not a perfect score, but the task is considerably more difficult than anything attempted in previous experiments. The same research group, led by Andrew Schwartz, had thus far only managed to get subjects to move a virtual cursor towards a target 80% of the time. In this study, the monkey succeeded in the equivalent challenge - moving the arm in the general direction of the food - 98% of the time. Beyond that, it also had to home in on the prize, grasp it and bring it back to its mouth.

Velliste believes that the secret to the arm's success lay in making it as natural as possible. For a start, it could freely move its head and eyes without affecting the signals controlling the arm. It could also move the fake arm in real time. There was only about an seventh of a second worth of delay between a burst of brain activity and the corresponding movement; natural arms have similar delays between thought and deed. This nigh-instantaneous control was obvious during one trial when the animal dropped the food and immediately stopped moving the arm. 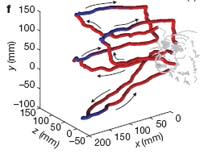 This natural responsiveness made it easier for the monkeys to accept the arm as their own. They learned behaviours that had nothing to do with the task, like licking remaining food off the fingers or using the hand to push food into their mouths. They learned to move the arm in arcs to avoid knocking the food off the platform while bringing it back in a straight line. They even learned that the food (marshmallows and grape halves) stick to the fingers so while they initially opened the hand only when it was near their mouths, one of them figured out that they could open the hand well before then.

Behaviour like this is very promising, for it suggests that interfaces between brains and computers could be used to drive prosthetics in real-world situations. So far, the main flaw with the fake arm is that it's not quite as fast as a real one yet. The monkeys took about 3-5 seconds to complete the task, which is about twice as much time as they would take with their own arms. This may be due to the need for small corrective movements once the arm was in roughly the right place.

The researchers also saw that one of the monkeys made small movements with its restrained right hand. Obviously, amputees wouldn't have that luxury, but Velliste argues that it's unlikely that these movements made controlling the arm any easier. For a start, the electrodes were only implanted in the right half of the monkey's brain, which controls the left arm not the right. And we know from other studies that you don't need to move in order to control a virtual prosthetic.