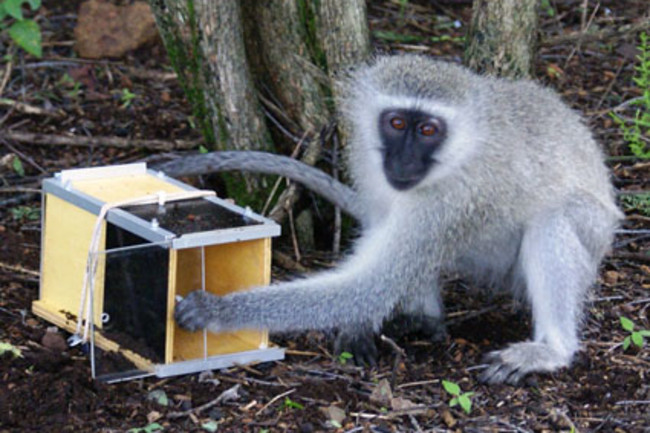 When vervet monkeys play follow the leader, they prefer to follow a female. That was the conclusion of Erica van de Waal, whose lengthy study of these primates in South Africa will be published this week in the Proceedings of the Royal Society B. When her team presented them with a tricky contraption they had to open to reach a tasty snack, the monkeys learned better if they watched a female from their group demonstrate the solution rather than a male. Seeking some answers to how social learning works in monkeys, van de Waal and her colleagues headed to Loskop Dam Nature Reserve. It took four months, they say, just to acclimate the wild animals to the presence of humans.

Once the monkeys were comfortable having scientists around, Van de Waal gave each group a wooden box containing a slice of apple. To get to the apple, the monkeys had to either pull open the door at one end or slide aside a door at the other. Half the box was painted black to differentiate the two ends [ScienceNOW]

. In vervet groups there's a dominant male and a dominant female, so the researchers say it's no surprise that one of those individuals stepped forward to accept the challenge of opening the box. In three groups it was the male, and in three the female took command.

"The models learned by trial and error how to open the box," explained Ms van de Waal. "Once they understood how to pull or slide the door open we let them perform 25 demonstrations" [BBC News]

. The scientists saw that other monkeys paid more attention when the dominant female was solving the puzzle as opposed to the dominant male. Later, the team passed out the same kind of box to other members of the groups. If those monkeys were among the groups that had watched the male, they didn't show a preference for which side of the box to open, which suggested they hadn't learned much during their spectating days. In fact, van de Waal says, they didn't even show a preference toward attempting to open the box. But, in the groups that watched their dominant female, 80 percent went for the side of the container they'd seen her open before. So were the monkeys just sucking up to the dominant male, trying to make him feel smart? That's not the answer at which van de Waal's team arrived. The key, they say, is that males grow up and then run off to find another group, while

females stay with their groups for life, giving them stronger bonds with the group and also a better knowledge of the resources in a particular territory. So it makes sense that other group members look to them for guidance, Van de Waal says [ScienceNOW]