Molars Don't Mean the End of Nursing for Chimps

Scientists overturn the long-held belief that young chimpanzees wean once their back teeth start coming in. 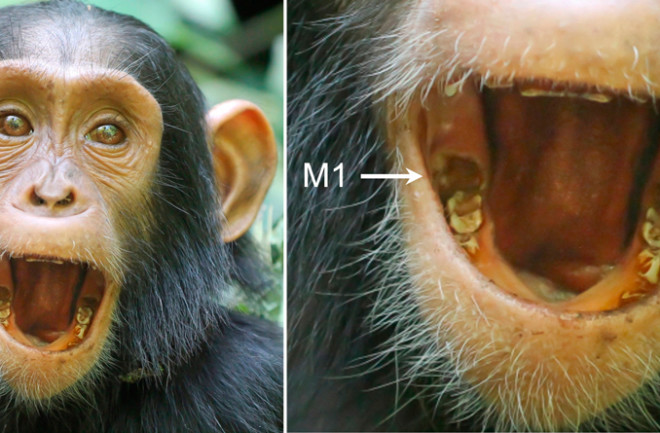 A few smiles, yawns and grimaces into the camera were all it took for Tanya Smith to shatter one of the longest-held truisms in primate studies — that a young chimpanzee’s molar development can be used as a proxy for developmental milestones such as age of nursing and weaning.

For decades, researchers assumed that chimps, like other nonhuman primates, weaned their young once the back teeth started coming in. The belief was so ingrained that paleoanthropologists and others investigating human evolution figured that if they saw molar eruption in the fossilized skull of a young human ancestor, they’d assume they knew the age and feeding behavior.

But Smith, an evolutionary anthropologist at Harvard University, wanted to test the theory by looking at wild chimpanzees. First, she wanted to see if molar development in wild chimpanzees was analogous to their captive counterparts, something she was dubious about.

But she also wanted to see whether chimpanzees also stopped weaning when their teeth came in. “It’s what I was taught,” she says. “So it was surprising to see that it didn’t bear out.”

Smith had two nature photographers follow five young chimpanzees at a field site in Uganda’s Kibale National Park for nearly a year and a half. The photographers took pictures of the inside of the young chimps’ mouths when they vocalized, yawned or gaped.

Smith and a team of researchers then studied the pictures. The first thing they noted is that wild chimpanzees and captive chimpanzees are similar in terms of age of molar eruption, usually occurring when the animals are slightly older than 3.

They also found that those first molars generally appeared nearly a year before the young chimps stopped nursing. Indeed, the young chimpanzees actually showed an unexpected uptick in nursing behavior after their grinders appeared. “Our research actually suggests that M1 (first molar) appearance may have more to do with adult feeding patterns than nursing or weaning,” says Smith.

She and her team believe that before 3 years old, chimpanzees are almost completely dependent on their mothers for survival. But as they approach 3, and their molars begin to appear, they have also learned some of the fundamentals of food gathering.

The research is “extremely creative and inventive,” according to Gary Schwartz, a paleoanthropologist at the School of Human Evolution and Social Change at Arizona State University.

“It now focuses the lens just a bit more on what life history, energetic and ecological attributes we should examine in other well-studied ape populations,” Schwartz says.

[This article originally appeared in print as "The Yawns Have It."]