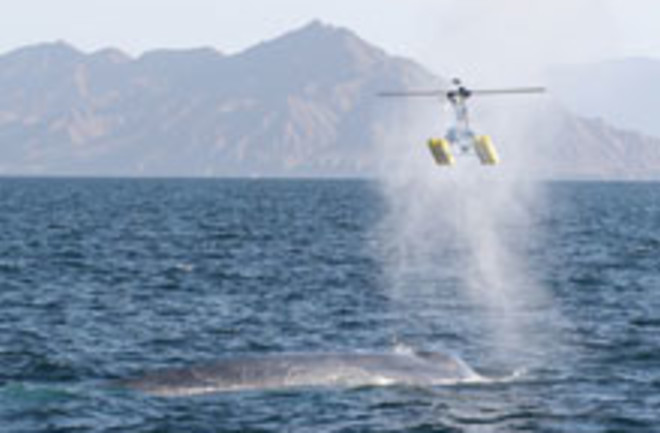 How do you get a snot sample from a shy behemoth of the deep? That question stumped researchers studying whale health, who wanted to give the animals check-ups without corralling and traumatizing them. Now, researchers have come up with an ingenious answer, flying a remote-control helicopter through the jets ejected by the whales’ blowholes. The helicopter has petri dishes strapped to it, which collect any bacteria, fungi, and viruses that were in the whales’ lungs.

The collected samples could make a big contribution to scientists’ understanding of infectious diseases in whale populations. Researcher Karina Acevedo-Whitehouse explains: “We don’t know much about them because they are so big and they are in the water all the time, and that makes it really difficult to obtain biological samples that are relevant to determining health in these populations; unless they’ve already stranded or unless they are in captivity, which are hardly representative of a normal population” [BBC News].

Acevedo-Whitehouse say the whale “blows” contain a mix of mucous, water, and gases that were in the whale lungs. She first tried to collect samples by tying herself to a research boat and leaning overboard to catch a bit of whale “snot” in Petri dishes. “It worked,” she says, “but it wasn’t very safe” [New Scientist]. The helicopter represents an even less invasive technique ideal for shy species like the endangered blue whale, she says. The whales notice the helicopter, often rolling on their sides to take a look, but don’t seem to mind it.

The team has taken samples from more than 120 whales in the Gulf of California and off Gibraltar. Each time also sampling the background ocean spray as a control. This lets them identify which bugs come from the whales, and which are present in the sea. The samples are taken back to the lab and scanned for specific DNA sequences that identify individual bacteria, fungi and viruses. As well as looking for pathogenic bugs similar to flu or TB, the researchers are trying to build a profile of what microbes a healthy whale normally carries in its lungs [New Scientist].