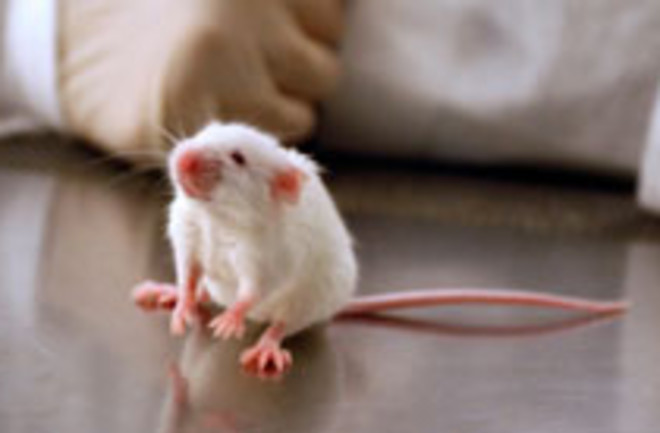 Researchers have endowed lab mice with the human version of a gene involved in language, and while the mice didn't exactly sit up and start reciting poetry about cheese, they did show some intriguing differences in both their vocal patterns and brain structure.

Mice have their own form of the gene, called FOXP2, but they and all other animals lack key changes found only in humans and our evolutionary cousins, Neanderthals. Some researchers speculate that these differences may help explain why humans are the only animal able to communicate with complex languages, and not simple grunts, barks or songs [New Scientist].

By tweaking the gene in mice and changing it to the human form, researchers hoped to get a clue as to how our early hominid ancestors were changed by the new form of the gene. The FOXP2 gene's association with language came to light in 1998 when

researchers found a mutated copy of the gene in a British family with a history of severe language disorders. Family members with the mutation have trouble speaking and understanding language [New Scientist].

But researchers stress that FOXP2 shouldn't be thought of as a single gene responsible for language; instead, its protein product turns on a cascade of other genes that play an important role in many parts of an embryo's development. So what happened to the lab mice that were given the human version of the gene? In the study, published in the journal Cell, researchers report that the mice still emitted ultrasonic whistles to attract their mothers attention like normal mice, but the whistles of the transgenic mice had a lower pitch. They demonstrated other behavioral changes, including less willingness to explore their surroundings. But most interestingly, the altered mice had altered brain structures.

In a region of the brain called the basal ganglia, known in people to be involved in language, the humanized mice grew nerve cells that had a more complex structure [The New York Times].

may have “contributed to an increased fine-tuning of motor control necessary for articulation,” the researchers wrote, which is “the unique human capacity to learn and coordinate the muscle movements in lungs, larynx, tongue and lips that are necessary for speech.” The FOXP2 gene affects the development of many organs, including the brain, lungs and esophagus, the researchers said [Bloomberg].

Related Content: The Loom: Speak, Mouse has more on this research DISCOVER: Why Has Steven Pinker Studied Verbs for 20 Years? DISCOVER: Great Mysteries of Human Evolution includes a discussion of the FOXP2 gene DISCOVER: Sing a Song of Evolution asks whether language evolved from mating calls Image: iStockphoto