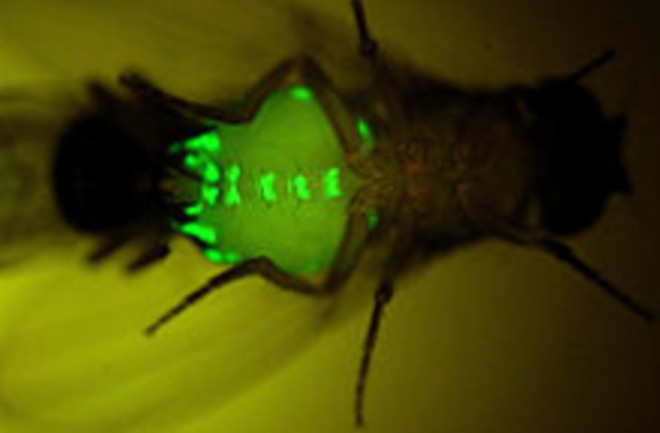 By altering a female fruit fly's pheromones, researchers have created an insect with so much sex appeal that it even attracts males of other species. But in a surprising twist, they didn't boost the levels of some courtship chemical--instead they created flies that lacked all pheromones, which were then besieged suitors.

The discovery suggests pheromones can be back-off rather than come-hither signals. The finding could lead to a better understanding of the chemical signals that help flies and other animals interpret the world, including how to select a mate and how to distinguish other species [Science News].

The study, published in Nature, also found that males who lacked all pheromones attracted unwelcome attention from other males, who attempted to copulate with their heads. Says lead researcher Joel Levine:

"It's amazing what you see.... There are some pretty crude movies" [Nature News].

To conduct their experiments, the researchers identified the cells on the inside of the fly's exoskeleton (pictured in glowing green) that produce the pheromones, and inserted a gene into the fly genome to kill all these cells.

The manipulated flies provided a sort of blank canvas to allow the scientists to test the role played by each chemical - and how the chemical signals interacted. "We found that one compound - one that males transfer on to females when they copulate - kept other males away," said Dr Levine. "It's the male's way of sort of protecting his investment" [BBC News].