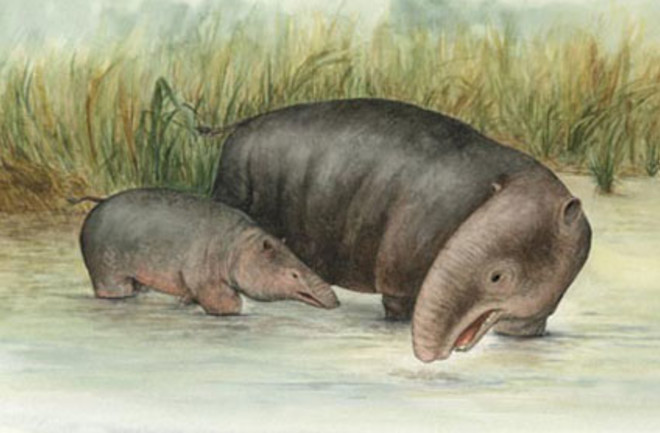 At least one species of proboscidean, a prehistoric relative of the elephant, lived in an aquatic environment, according to a new study published in the Proceedings of the National Academy of Sciences. The extinct water-lover, which belonged to the genus Moeritherium and lived around 37 million years ago, appears to have munched on freshwater plants and spent most of its days in swamps or river systems, according to Alexander Liu, an earth sciences expert at the University of Oxford and the lead author of the study. The research team based its findings on a group of fossilized teeth found in northern Egypt. By analyzing the patterns of different oxygen and carbon isotopes in the tooth enamel, Liu and his crew were able to identify the animal's diet and lifestyle. The Oxford scientist was particularly intrigued by the possibility that a mammal could have started out terrestrial (as did all mammals) and evolved into an aquatic species, then reverted back to terrestrial—with the end result being modern elephants, lumbering across the plain and visiting their ancestral graveyards. Ironically, while the creature is related to the elephant and enjoyed a hippo's lifestyle, it reportedly [strike]had hooves and[/strike] looked like a "cross between a horse and a rhino." So perhaps a more appropriate title would be "equaphantopotonocerous." Image courtesy of Luci Betti-Nash, Stony Brook University/PNAS.