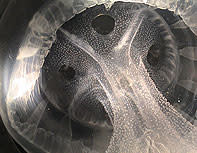 Kevin Raskoff, a marine biologist at California State University at Monterey Bay, spent seven years tracking down this bumpy—a unique, tentacle-free jellyfish whose four arms and softball-size bell are covered with pimplelike protrusions. The bumps are balls of stinging cells that can act like little fingers, carrying bits of prey toward its mouth. Amazingly, this creature emerged from Monterey Bay, one of the best-studied regions of the world’s oceans. “What else is down there is still a big mystery,” Raskoff says.