It is the instinct of every mother to protect their children as they grow up, shielding them from the dangers of the outside world. Right from birth, life can be a difficult experience. Within a few hours, the child is sent from a safe, warm, constantly-nourished cocoon into a bright, noisy and threatening world. This stressful transition poses a serious threat to the newborn's vulnerable and still-developing mind. But new research has shown that even in these first vital hours, mothers are already inadvertently protecting their children - by shutting down their brain cells.

In foetuses and new-born mammals, brain activity depends on a vital molecule called gamma-aminobutyric acid, known by the friendlier name of GABA. GABA is a neurotransmitter, a chemical that sends messages between nerve cells, and in young mammals, its message almost always says "Fire.

But Roman Tyzio and colleagues from the Mediterranean University, Marseilles, found that in the brains of baby rats, the message changes just before delivery. For a brief time window, rather than stimulating brain activity, GABA puts a finger to its lips and silences nerve cells instead. During this time, Tyzio saw that the number of cells affected by GABA plummeted to negligible levels. 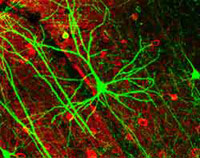 His group found that this chemical volte face is triggered by the mother, through an all-important, multi-purpose hormone called oxytocin. Oxytocin is another neurotransmitter, and one that is almost synonymous with social relationships. It has been linked to sexual arousal, feelings of trust, love and monogamy. During childbirth, massive amounts of oxytocin are released by the mother and can reach the foetus via the placenta.

Artificially adding oxytocin to the brain tissue of foetal rats caused cells to ignore GABA just as they do before delivery. And giving expectant mothers atosiban, an anti-oxytocin chemical, stopped this from happening. It seems that oxytocin's long list of abilities now includes temporarily shutting down an infant's nervous system during birth.

Many mothers might dream of doing the same later on in their child's life but at this crucial juncture, it protects them from the dangers of oxygen deprivation. A lack of oxygen during birth is the number one cause of death or brain damage in newborns. But because oxytocin silences a baby's brain cells, it greatly reduces their energy needs and their dependency on oxygen.

Tyzio found that the brain cells of baby rats survived without oxygen for an hour if they were delivered naturally. But if mothers were given atosiban, the brain cells of their babies died within 45 minutes. Other studies in sheep have found that the massive flush of oxytocin during childbirth is crucial if mothers are to form stable emotional ties to their babies. Now, thanks to Tyzio's team, we know that oxytocin might also be important for the baby's mental development.

These findings have important implications for human mothers too. The oxytocin spike relies on the baby pressing against the cervix during birth. Those delivered through caesarean sections may miss out on the hormone and all its benefits. Caesarean sections are becoming increasingly popular, mainly as an elective procedure rather than an emergency one. Studies like this could give women who opt for these operations pause for thought.