Massive eggs were the most fragile of any bird (Pocket Science) 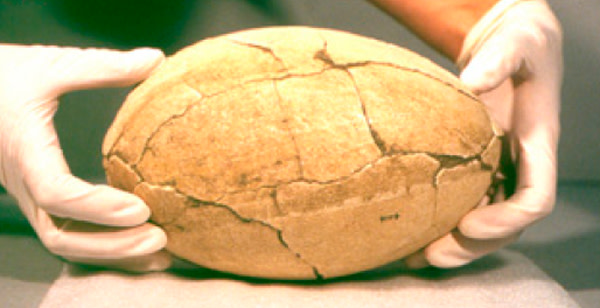 Some of the largest bird eggs in history were surprisingly also some of the most fragile. That’s the conclusion from Leon Huynen from Brisbane University, who has been studying the eggs of an extinct group of flightless birds called moas. These giants roamed New Zealand until the 14^th century when they were wiped out by humans. Today, all that remains are bones and eggs but some of the broken shells have preserved traces of the moas’ DNA. Earlier this year, Australian scientists sequenced the genes of moas for the first time. Now, Huynen has used the same techniques to work out how these birds cared for their young. By sequencing DNA from 69 shell fragments, he worked out which of the 10 species of moa had laid each egg. To his surprise, he found that several of the eggs were incredibly thin, including some belonging to two species of Dinornis, the heaviest of moas. These eggs were barely more than a millimetre in thickness, even though they were laid by female birds that weighed as much as 250kg. Their fragility is astounding. Even though the largest moa eggs were 80 times larger than those of a chicken, they were more prone to breaking than any egg from the 3,400 species of birds measured to date. The reason for this fragility is unclear but regardless, the huge females couldn’t possibly have incubated the eggs by sitting on them; instead, that job fell to the males. When Huynen sequenced DNA from the outside of the shells, he only found male sequences. Among the moas’ modern relatives, like ostriches, emus and rheas, it’s the lighter male who incubates the eggs and rears the young. It seems that moa daddies shared the same burden. However, moa eggs were so easily broken that even the lighter male might have shattered them. It’s possible that they built special nests but all the evidence so far suggests that they merely scraped a shallow depression in the ground and lined it with bark and coarse foliage. For the moment, we have no idea how these big birds incubated their young. Reference: PNAS http://dx.doi.org/10.1073/pnas.0914096107More on eggs