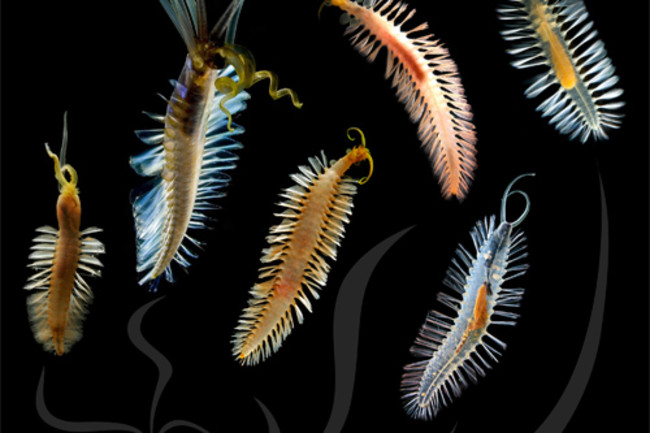 During chase scenes, movie protagonists often make their getaway by releasing a decoy to cover their escape or distract their pursuer. But this tactic isn't reserved for action heroes. Some deep-sea animals also evade their predators by releasing decoys - glowing ones. Karen Osborn from the Scripps Institute of Oceanography has discovered seven new species of closely related marine worms (annelids) that use this trick. Four of these pack up to four pairs of "bombs" near their heads - simple, fluid-filled globes that the worms can detach at will. When released, the "bombs" give off an intense light that lasts for several seconds. The worms were collected from the Pacific Ocean by remote-controlled submarines. Unfortunately, the small size of the bombs and the low resolution of the sub's cameras meant that Osborn was never able to film the worms actually releasing their glowing payload in their natural environment (although she did capture some great videos; see bottom of post). Nonetheless, the specimens she recovered would indeed launch one or two bombs, when they were prodded on any part of their body. If she prodded them further, they would release more bombs, until they ran out. The fact that some worms also carried much smaller globes suggests that they can regenerate them once their supply is exhausted. 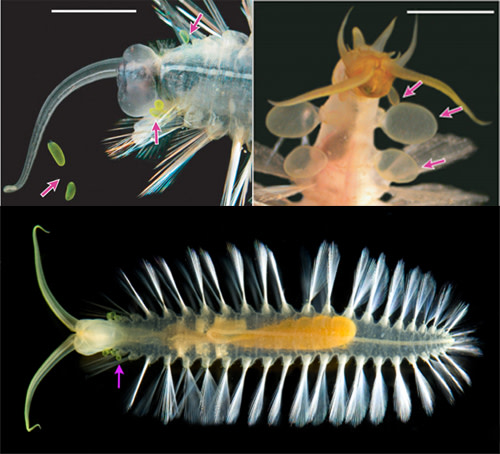 Osborn thinks that these structures are most likely used in defence, although without actually seeing the reactions of predators, that's still to be confirmed. The fact that the worms release their bombs when they're touched on any part of their body certainly supports a role in defence, as opposed to courtship. Besides, other worms glow in defence too. Some do so when startled. One luminous species (Eusyllis bromstrandi) switches off the lights on its head when threatened, but keeps its rear end glowing to shift a predator's attention to less important bits of anatomy. Other animals, including a brittle star (a type of starfish) and a squid, release luminescent fluid to cover their escape. Of Osborn's new species, the smallest ones are about the length of a fingernail and the longest are about the length of a finger. Their flanks are lined with rows of bristled fans that act as oars, beating in mesmerising waves to propel the worms along. Thanks to these oars, the worms are excellent swimmers that can move both forwards and backwards, an ability that has given some of them the genus name of Swima. As Osborn says, this discovery emphasises how little we know about the deep sea, and how much there is left to discover. Reference: Science10.1126/science.1172488 Images copyright of Karen Osborn and AAAS/Science; videos copyright of MBARI More on luminescence: