March of the titans: fossil teeth show dinosaurs heading for the hills 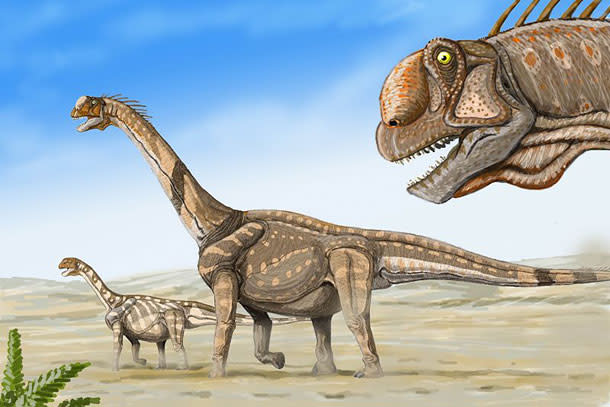 We’re in western America in the late Jurassic period, and a herd of Camarasaurusdinosaurs is on the move. It’s the dry season and the giants are running out of water. Fortunately, they know exactly where to find a drink: a range of volcanic highlands to the west. To quench their titanic thirst, they must head for the hills. Now, 150 million years later, Henry Fricke from Colorado College had discovered a way of reconstructing their migration.

Vast migrations are a common feature among modern animals, and it’s reasonable to think that some dinosaurs undertook similar treks. But how do you work out the routes of long-extinct animals, when you only know about the spot where they died? The answer, as with many aspects of dinosaur life, is to look at their skeletons. As well as revealing the shape and size of these beasts, dinosaur fossils can also hold a record of their travel plans. Reptiles replace their teeth throughout their lives and the dinosaurs would have been no different. Whenever they drank, they incorporated oxygen atoms from the water into the enamel of their growing teeth. Different bodies of water contain different mixes of oxygen isotopes, and the dinosaurs’ enamel records a history of these blends. They were what they drank. It’s easy enough to measure the levels of oxygen isotopes in dinosaur teeth, but you need something to compare that against. How could anyone possibly discern the levels of such isotopes in bodies of water that existed millions of years ago? Local rocks provide the answer. The oxygen also fuelled the growth of minerals like calcium carbonate (limestone), which preserve these ancient atoms just as dinosaur teeth do. If dinosaur enamel contains a different blend of oxygen to the surrounding carbonates, the place where the animal drank must be somewhere different from the place where it died. Palaeontologists have used oxygen isotopes to infer all manner of dinosaur traits, from the fish-eating habits of spinosaurs

to the hot body temperatures of sauropods

to the chilly conditions endured by Chinese dinosaurs

. These atoms have acted as menus and thermometers. Now, Fricke has turned them into maps. He studied thirty-two Camarasaurus teeth collected from two sites in the Morrison basin

, a stretch of Jurassic rocks in the western United States that’s rife with the remains of giant sauropod dinosaurs. Compared to the surrounding sediments, the Camarasaurus teeth had far less of the heavier oxygen-18 isotope

, relative to the lighter oxygen-16. In fact, they had the lowest ratios of oxygen-18 to oxygen-16 ever recorded in the basin. This implies that the animals must have drunk at higher ground. As air rises, it cools and condenses. Water molecules start to rain out, and those contain heavier oxygen-18 atoms go first. As a result, mountain water is low in oxygen-18 and rich in oxygen-16. The camarasaurs’ teeth betray the fact that they spent at least part of the year in a highland getaway, before returning the basin where they eventually died. The most obvious high terrain lies in the volcanic mountains to the west. If that’s where they went, the Camarasaurus must have migrated around 300 kilometres in each direction. That’s further than, say, an elephant but less than today’s champion land traveller –the caribou

, which migrates over 5,000 kilometres a year. Fricke thinks that the camarasaurs’ voyage was a seasonal one, rather than a one-off trip. When he took slices through individual teeth, going from the oldest enamel at the tip to the youngest at the root, he found a dip in the ratio of oxygen-18 to oxygen-16. This suggests that as the tooth was created, the animal moved from the basin into the highland regions, probably over the course of 4-5 months. It must have made the return journey shortly before it died. Other scientists have suggested that the Morrison sauropods travelled over long distances to find the food and water they needed to survive

through hard dry seasons, in the way that elephants today. Fricke’s study supports that idea. It involves a lot of assumptions, including about how oxygen isotopes are reflected in the dinosaur enamel, how this changed with temperature, and how hot the Morrison basin was at the time. But even so, Fricke says, “We tried to be as conservative as possible in our assumptions. I'm as confident [in our conclusions] as I can be given the inherent difficulties of studying strange dead things!” Mathew Wedel

, a sauropod specialist, is intrigued by Fricke’s study, but he thinks it’s a small step away from being convincing. “The obvious thing to do would be to compare the oxygen isotope signals in the Camarasaurus teeth with those from animals with similar tooth formation, which could not possibly have made the same migration: crocodilians.” Fortunately, Dinosaur National Monument is full of the skeletons of ancient crocodiles. Wedel adds, “Data from very small dinosaurs, like Fruitadens

or the various small theropods of the Morrison, would be even better because they were biologically more similar to sauropods. It's straightforward work, so hopefully it will be done, and soon.” Fricke says that while his research strongly supports the idea that Camarasaurus undertook long seasonal migrations, “it does not, however, imply that they must have done so.” To do that, he’ll have to look at other populations of Camarasaurus, and sauropods from different parts of the world. That should tell him if long migrations were a common feature in the lives of these ancient giants, or something specific to the harsh conditions of the Morrison basin. These studies, which are underway, might even provide clues about why these dinosaurs evolved into the largest land animals the world has ever seen. Fricke says, “If large dinosaurs such as Camarasaurus migrated, but smaller coexisting dinosaurs did not, then it could be possible to argue that migration and the evolution of super-large body sizes went hand in hand.” Reference: Fricke, Hencecroth & Hoerner. 2011. Lowland–upland migration of sauropod dinosaursduring the Late Jurassic epoch. Naturehttp://dx.doi.org/10.1038/nature10570