March of the locusts - individuals start moving to avoid cannibals

A tenth of the planet's population occasionally suffers through devastating famines because small insects fear being bitten in the bum. That's the astonishing message from a new study of one of mankind's greatest pests - the desert locust. 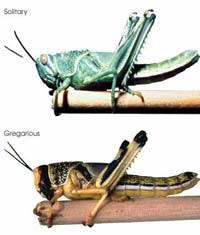 Swarms can stretch for several hundred square kilometres and each of these harbours up to 80 million hungry sets of mandibles that eat their own body weight in food every day. These plagues are unpredictable but they only form when locust populations reach some sort of critical mass. Desert locusts are two insects for the price of one; at a crowded tipping point, they transform from loners (which are green or brown) into more sociable forms that are red or yellow and prone to swarming.

With much of Asia's and Africa's food supplies at stake, researchers are keen to discover what prompts the transformation from disorders groups of solitary locusts to highly organised marches of sociable ones. Two years ago, an international team led by Stephen Simpsonshowed that this switch is very rapid. Once groups reach a certain density, individuals that were previously doing their own thing started stepping in line with their neighbours.

This sudden coordination is an important step in the genesis of a swarm, but the researchers had still to uncover why the locusts aligned so neatly. Now, working with the same group, Sepideh Bazazi at the University of Oxford has found part of the answer - they to march to avoid getting cannibalised by other locusts behind them. All the individuals in a dense group are after the same things - protein, salt and the like. If one stops moving, it risks acting as a source of these nutrients for others behind it. For locust groups, life is about moving with the crowd, or being eaten by it.

Should I stay or should I go?

Bazazi studied the movements of locusts by making them march around an round arena with a raised dome in the middle, looking rather like a metallic sombrero. Automatic software tracked their speed and positions as they circled the ring.

Bazazi found that locusts are far more likely to start moving when they detect other locusts approaching from behind. When she severed the main nerve cord in the insects' abdomens and deprived them of feeling, she found that they were less likely to move than individuals with full feelings in their backsides, and those that moved did so more slowly. This reticence only manifested in groups; solitary locusts that were operated on were no different to their untouched peers, showing that the surgery wasn't affecting their general movement.

This inability to sense others behind them cost the numbed locusts dearly. They were six times more likely to be injured by cannibalistic attacks (although these injuries didn't happen quickly enough to account for their sedentary behaviour).

March of the locusts 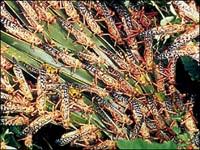 Putting all these pieces of the puzzle together, Bazazi suggests that locusts in a group start to march forwards to avoid getting bitten by those behind them. The fleeing locusts run into those in front of it, who themselves become a potential meal and have their own impetus to move forward. The result is a vicious cycle, where the movements of just a small number of individuals can set an entire group off into a march.

Cannibalism isn't the only motivating factor for the locusts - certainly, a need to find more food drives them too - but it could play an important role in driving the insects to march. Once this happens, it's constant contact on their legs that turns a march into a swarm. Simpson's lab had previously found that repeatedly touching the hairs on the insects' hind legs causes them to shift from the solitary form to the swarming one within a matter of hours.

Locusts aren't the only member of the grasshopper family for whom cannibalism is a concern. The Mormon cricket is another agricultural pest that swarms in large numbers, and Simpson's lab found that they too are driven forward by the desire to cannibalise and avoid being cannibalised. It was this discovery that inspired Bazazi's work on locusts.

This idea puts a new spin on animal migrations as a whole. These mass movements are normally seen as a way for animals to exploit resources that vary across time and space. To migrate successfully, animals are thought to suppress certain routine behaviours like foraging, or indeed cannibalism. But Bazazi's study turns this idea on its head by showing that the threat of cannibalism in itself can drive the movements of migration hordes.