Male Fireflies Flicker in Sync to Catch a Female's Eye 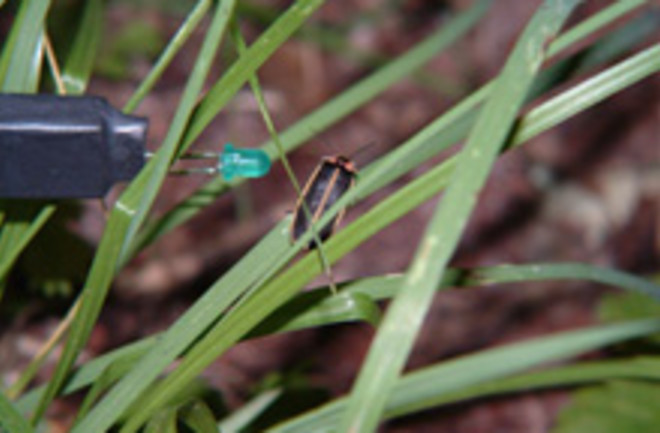 Teamwork: That's what it takes to get lucky (if you're a certain kind of firefly). Suppose you're a single male firefly, fluttering about on a muggy night. You flash your bioluminescent signal to try to catch a lady's attention, but how is she going to pick out your blip from all the other points of light ablaze when various species of firefly zoom around? About 1 percent of firefly species have figured out how to beat the noise: They team up and flash their lights in an unmissable, synchronous signal. And in a study in this week's Science, researchers unlocked the inner workings of this sexual back-and-forth. Biologists had long known about the synchronous flashing, but had not tested the idea that each species has its own rhythm—its own signal to complete the optical call-and-response between male and female.

To do this, Andrew Moiseff of the University of Connecticut in Storrs and Jonathan Copeland at the State University of New York at Stony Brook turned to LEDs. They put female synchronous fireflies (Photinus carolinus) in a Petri dish surrounded by green LEDs, and flashed the lights in the same pattern used by male fireflies. The females responded with their signature pattern 82 per cent of the time – but only if the LEDs were synchronised. When the lights did not flash in unison, female response dropped to 10 per cent or less [New Scientist].

The code of flashing lights is not the end of the story, of course. It takes a group of males to flicker in unison, but not all of them will get to mate when the female responds with her "come on over here, fellas" signal.

"Six to a dozen males may be attracted," said Moiseff. "We don't know if she's distinguishing among males when she responds." When a female firefly -- which is really a kind of beetle -- ventures to give the signal, she is calling quite a crowd. In the field it's not at all uncommon to find a solitary female surrounded by a dozen hopeful males, Moiseff said. So there is yet another level of selection that is going on which researchers have yet to discover, he said [Discovery News].

While that second half of sexual selection remains a mystery, the finding presents some enticing hints about the brains of these insects

The study tells the researchers the following about the firefly brain: it is able to count, measure time differences and pause while awaiting a response. "Our real interest is understanding brain circuitry," Moiseff says. "The method they're using to do this is through pattern recognition, something that is important to all animals.... We want to understand how the brain can process these visual signals" [Scientific American].

Related Content: DISCOVER: 8 Marine Creatures That Light Up the Sea

(how they contribute to medicine) The Loom: Fireflies: The Invertebrate Opera