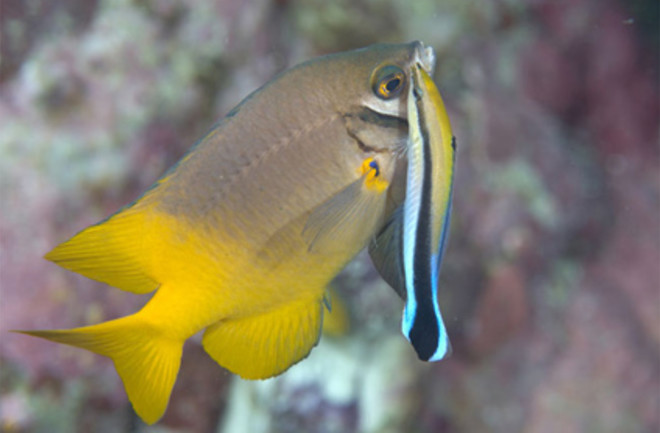 Cleaner fish have a pretty good little business going. These select species of small underwater inhabitants set up "cleaning stations" where they eat parasites and dead tissue off larger fish. Sure, it might not be a gourmet meal, but in exchange for the service the large fish don't eat the cleaners. In some cases a pair of fish work in tandem, and a new study has found that males will punish their female partners if the females go overboard and eat more of the client than they should. While the research shows that fish, like people, can be aggrieved on behalf of a third party, don't be too impressed with the males' altruism—they get plenty out of the deal. For a study in Science, researchers looked at the fishLabroides dimidiatus, whose females usually play by the rules of the cleaning business.

But the females can sometimes be too greedy and "bite the flesh of the fish they are cleaning in a bid to get to the mucus, which is more tasty than the parasites on the surface," researcher Redouan Bshary found. The male fishes, which are bigger in size, would then step in to chase the females away [AFP]

. To simulate and examine this aquatic arrangement in the lab, Bshary's team set out a plate that took the place of the "client" fish. It featured the options of fish flakes and prawns for the cleaner fish to eat—the flakes as a stand-in for the parasites the fish are supposed to eat, and the prawns acting as the more desirable mucus.

However, the researchers took away the plate if any of the fish ate a prawn (as if the client were to swim away). They saw that the male cleaner fish — even in this unfamiliar lab setting — would punish, or chase away, the female fish if the females ate a prawn [LiveScience]

. Why so serious, male fish? On the one hand, it's just good business. If the females eat the client fish's mucus, researchers say, it scurries off, and the cleaner fish team loses a customer. But there's more to it than that: The males are really just cutthroat capitalists, looking out for themselves at their partners' expense.

"The male's dinner leaves if the female cheats," explained lead scientist Nichola Raihani from the The Zoological Society of London. "By punishing cheating females, the males are not really sticking up for the clients but are making sure that they get a decent meal" [BBC News]

. Altruistic or not, it's hard to fault the males for keeping up appearances. A Nature study back in 2006 suggested that client fish are choosy shoppers, spying on cleaner fish to see who runs the best service. With all the cheating going on, they'd be fools not to. Not only do cleaners cheat their clients and go for the mucus, but there are also impostor cleaners—fish that mimic the appearance of cleaners to capitalize on that whole "not getting eaten" thing. Related Content: 80beats: DNA Scanner Proves That NYC Sushi Contains Endangered Bluefin Tuna Discoblog: Was This Fish the Inspiration for Alien? DISCOVER: The Most Important Fish in the SeaImage: Richard Smith