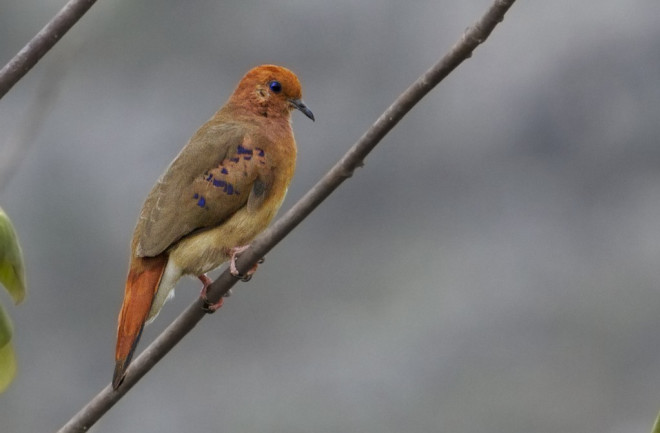 The blue-eyed ground dove hadn't been documented in the wild for 75 years. (Credit: Rafael Bessa) Last June, driving through a rural part of Minas Gerais state, ornithologist Rafael Bessa came across an unusually beautiful stretch of cerrado, the vast, diverse savanna that sprawls across much of central Brazil. So appealing was this landscape that Bessa, an ornithologist working on an environmental assessment in the area, decided to get out and have a look around. Though he saw nothing of particular note, he heard a song he didn’t recognize. Perplexed, Bessa returned to the same scenic stretch of road the next morning, better equipped. When he heard the song again, he recorded it; as he played back the recording, the bird came into view. It looked like a dove of some sort. Bessa took a few pictures, and then, zooming in on the camera display, began to grasp the magnitude of what was happening.

“I couldn’t believe what it was,” recalls Bessa. “I said to myself, ‘Calm down.’” He’d just recorded and photographed the elusive blue-eyed ground dove, Columbina cyanopsis, a cinnamon-stained, sapphire-eyed “ghost species” that hadn’t been conclusively documented since 1941. Bessa rushed back to the nearest internet connection and contacted a trusted ornithologist friend and verified the identification. Since then, he and a small team from two Brazilian bird conservation organizations – SAVE-Brasil and Observatório de Aves do Instituto Butantan – have returned to the site12 times to study the rediscovered dove and begin working on a conservation plan. After keeping everything hush-hush for 11 months, Bessa and his colleagues announced the finding earlier this month at a national bird conference in São Paulo, where it was billed as the ornithological event of the decade.

Ornithologist Rafael Bessa said spotting the blue-eyed ground dove was the highlight of his career. (Credit: Rafael Bessa)  “The discovery of this bird gives us hope,” says Bennett Hennessey, Brazil program director for the American Bird Conservancy. “We have not lost this species … now, we have to make sure it doesn’t go extinct.”

To accomplish that, conservationists will first focus on protecting the small area where Bessa stumbled across the bird — he estimates the doves’ core territory is no more than 14 acres. Pedro Develey, executive director of SAVE-Brasil, says his organization is raising funds to purchase the land – the exact location of which remains a secret – and hopes to finalize the process by the end of the year. Eventually, Develey hopes to see the area come under public protection and management, perhaps as part of a new state park that was already being planned nearby. So far, the highest number of individuals that Bessa has found on his subsequent trips back to the site is 12. Given the extremely small population and range of blue-eyed ground doves, Develey said another pressing need is hiring someone to protect the dove from threats like fires, poachers — rare doves are highly sought after by collectors and breeders, Hennessey notes — and hordes of overeager birdwatchers and shutterbugs.

Bessa and other ornithologists working on the conservation plan will continue to study the blue-eyed ground dove in the field to learn as much as they can about the species, whose natural history is almost entirely unknown. Now that researchers know at least one reclusive population blue-eyed ground doves is quietly hanging on in the far reaches of Minas Gerais, the search is on for other surviving groups. Though searches in other similar patches of habitat nearby and in several neighboring states have come up empty so far, Develey and Bessa think that there may be more – especially given the bird’s relatively large historic range. Even if no others are found, Hennessey said, habitat protection and careful management could allow the blue-eyed ground dove to mount a comeback, despite the conventional wisdom on genetic bottlenecks and minimum viable population size. “Many would say it’s too late … but that doesn’t seem to be the case in the real world,” says Hennessey, pointing to whooping crane and California condor populations, which both recovered somewhat from lows of around two dozen individuals. It all goes back to a pretty stretch of roadside and that old birdwatcher’s itch to wander around with eyes and ears peeled. You never know what you’ll find. “That moment with this dove was the pinnacle of my life as an ornithologist so far,” says Bessa.