Look Closely, This Ant Is Carrying a Passenger 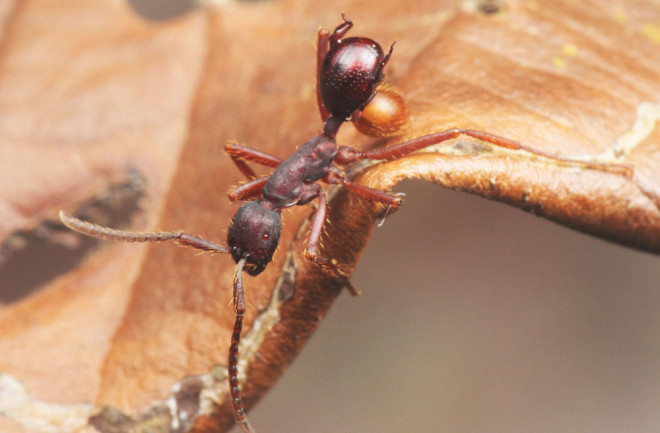 Can you spot the hitchhiker? (Credit: M. Maruyama) Sometimes even experienced entomologists need a double-take to fully grasp what they're seeing. And upon closer examination, they found a new species hiding in plain sight. A new kind of beetle discovered in the Costa Rican rainforest almost passed by unnoticed, because it hides so well on the army ants it uses for transportation. It was only after the researchers tried to puzzle out the mystery of the ants with two abdomens that they spotted the squat beetle, named Nymphista kronaeuri after Daniel Kronauer, the biologist who first found the species.

Riding an army ant is no easy task. The ants march at a furious pace through the rainforest, and the many twists and turns throw off even the most ardent ant cowboys. To ride their bucking steeds, the beetles rely on a pair of specialized pincers perfect for grasping an army ant's waist. When locked in, the beetles hang on tight for the ride. Their rounded carapace and shiny exterior serves as camouflage, hiding them from both predators and the ants themselves.

The tiny beetle specimen. (Credit: D. Kronauer) Army ant colonies—hundreds of thousands strong—go through periodic cycles of nomadic and sedentary activity that coincides with the queen's breeding cycle. The ants move to new locations every night during their roughly three-week roaming phase, gathering food in massive swarms as they do. At night, the ants themselves form a living colony, called a bivouac, when it's time to rest. Ants link together to create a roughly ball-shaped structure around their queen and larvae, complete with tunnels and chambers to allow for movement. And, following right along with this daily cycle of marching and resting are the kronaueri beetles, hanging tight and staying out of sight.

The beetle blends in well with its taxi. (Credit: M. Maruyama) The beetles seem to prefer riding on medium-sized worker ants, and tend to be found toward the end of the column, where ant traffic is lighter. They also seem to have evolved grooves in their carapace that allow them to tuck their legs and antenna in tight, preventing them from being grabbed. The researchers don't yet know exactly why the beetles hitchhike—sticking close to the colony could offer protection and easy access to the food. Researchers described the new species in a paper published Thursday in BMC Zoology.

A close-up look at how the beetle locks its jaws for a ride. (Credit: Christoph von Beeren and Alexey Tishechkin) N. kronaueri isn't the only ant-surfing insect. Like camp followers in the Middle Ages, numerous species of millipedes, mites, bristletails, beetles and more either hop on board or travel along with marching columns of army ants. Most haven't evolved to blend in with their rides, however, and only one other species is known to grab on in the same place — although they prefer to ride on the ants' underside. Given the diversity of ant hitchhikers already found, the researchers say that there are likely many more awaiting discovery; they'll just need to take a second look.