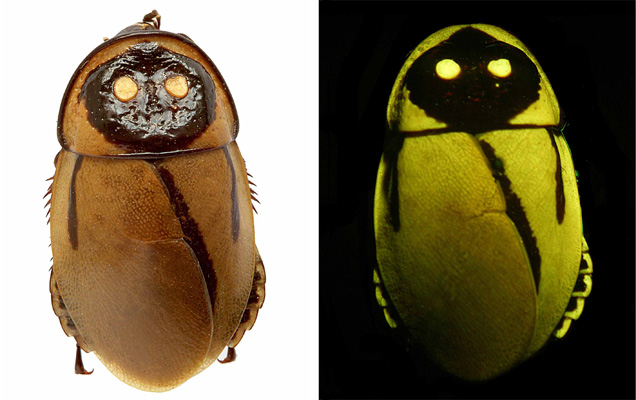 Under normal light, this roach looks normal enough. But under a fluorescent light, its three spots---two large ones and one very tiny one just visible under the right spot---light up like a Christmas tree. This remarkable species of South American cockroach, Lucihormetica luckae, owes its fluorescence to bacteria. The spots on the dark brown area of its carapace are pits inhabited by microbes that glow under fluorescent light. A recent analysis

of these creatures' bioluminescence demonstrates that they and their cousin species glow at the same wavelengths as a toxin-producing beetle that lives in their area, suggesting that the roaches are mimicking a deadly neighbor to avoid getting picked off by predators. However, it may not be predators these roaches need to worry most about: it's habitat destruction. No specimens have been found since the volcano they live on erupted two years ago. Image courtesy of Vršanský et al., Naturwissenschaften (2012)