Look At This: A 100-Million-Year-Old Spider Attacking A Wasp 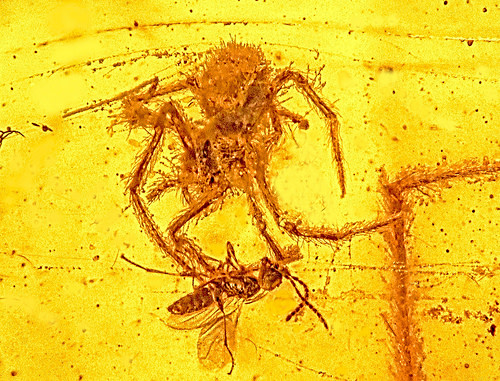 This lucky wasp did not get eaten by the spider attacking it. But when we say "lucky," we mean it only in a certain sense: moments after the wasp's capture, they were both overtaken by a flow of tree resin and were preserved in amber for the next 100 million years, while their species and their dinosaur contemporaries from the Early Cretaceous period went extinct. The amber fossil is described in a new paper by George Poinar, the entomologist whose investigations into extracting dinosaur DNA from amber-locked mosquitoes inspired the book and movie, Jurassic Park. New research into the half-life of DNA puts that out of the question, but who knows: it might not be too late for these ancient bugs to cut a movie deal.

Did Humans and Dinosaurs Ever Live Together?