Flytraps count down to chow time. 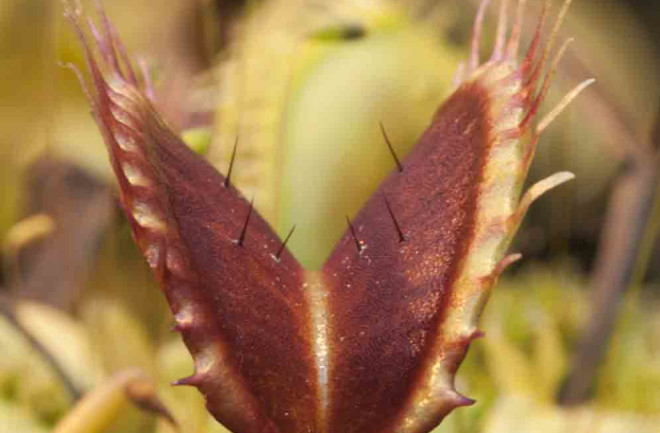 Venus’ flytraps evolved in rough neighborhoods where soil didn’t always provide enough nutrients. To survive, they supplement their diets with insects, using a clever counting scheme to snap the trap shut and digest the meal.

When a critter bumps into one of the flytrap’s sensitive hairs, the pressure sends an electrical signal racing from cell to cell, priming its jaws to close. Wary of false alarms, however, the plant waits for a second touch. That one snaps the trap shut.

As the bug struggles, it keeps bumping into trigger hairs, producing a hormone that activates digestion. Larger, more active insects, with more nutrients to offer the flytrap, hit more triggers. German biophysicist Rainer Hedrich of the University of Würzburg and his colleagues found that flytraps count the triggers to size up their prey, telling them how much effort to invest in digesting the meal.

The fifth hair trigger signals the 37,000 glands that line the inside of the trap to start secreting acidic enzymes, which digest the unfortunate insect alive. With every hair trigger, the flytrap produces more enzymes, keeping count to keep up with the size of its prey.

Sundews, pitcher plants and other carnivorous species also supplement their diets with insects, but it seems that only the flytraps have learned to count. They’re also the most active plant predators, and Hedrich says that’s no coincidence. “I think the active ones are smarter,” he says.