Like a Wool Sweater, Scottish Sheep Shrink As Climate Heats Up 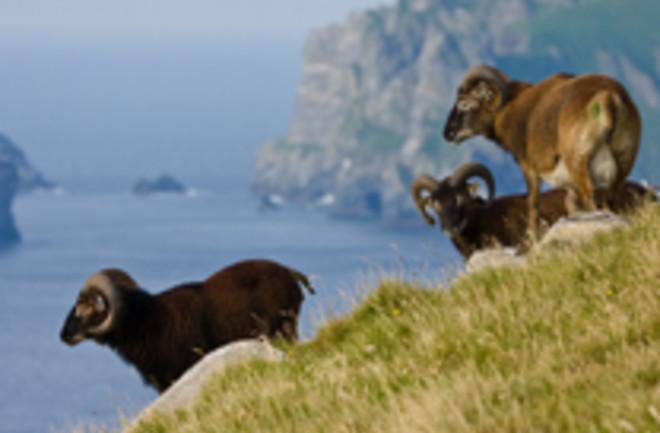 Don't be alarmed, but on a remote island in Scotland the sheep are shrinking. Instead of gradually increasing in size as expected due to evolution, the average weight of the wild sheep has decreased as average temperatures heat up. The discovery shows that a species' response to global warming can be unpredictable, and can be based on multiple factors. According to a study published in Science, warmer and wetter winters have made it easier for smaller sheep to survive the hard months and go on to bear offspring, thus passing these "small" genes onto the next generation of sheep. Since 1985, the average weight of the wild Soay sheep living on the island of Hirta has decreased by about 5 percent. Due to global warming, the winters on the Scottish isles are becoming

becoming shorter and milder. That makes food more abundant and allows some of the smaller, more vulnerable and younger sheep to survive. Then they go on to have offspring that tend to be small themselves — and have a better chance of survival because of the increasingly mild winters. "The environmental and evolutionary processes are intertwined. There's still natural selection, but it's not leaving as big a signature as it used to. There's still a disadvantage to being small, but not as much" [Time], says lead researcher Tim Coulson.

There's another factor that also influences the average size of sheep in the flock, one that scientists call the "young mum" factor. Because sheep bear offspring at a young age relative to other mammals, and because the size of the mother sheep limits the size of the lamb she can carry, lambs born to yearling ewes instead of fully grown sheep weighed less at birth than their mothers did and remained smaller throughout their lifetimes [Los Angeles Times].

That effect didn't account for the entire decrease in average weight, but when combined with the effects of milder winters, the researchers came up with a decrease in size that correlated well with the actual decline shown by the data. The somewhat counterintuitive decrease in the sheep's average size demonstrates the unexpected effects the changing climate may already be having on today's species.

Classic evolutionary theory would predict that wild sheep gradually get bigger, as the stronger, larger animals survive into adulthood and reproduce... The team says this shows the "subtle interplay" between evolution and the environment [BBC News]. The scientists hope to use the data and methods they've amassed to produce a model to predict future changes in the size of sheep in the flock.