Several commenters checked out the 3-D video of the world's oldest fossil brain I posted yesterday and were struck by just how tiny the 300-million-year-old fish's brain was in comparison to its braincase. Their verdict: shrinkage. In the paleontological sense of the word, not the Seinfeldian one. After death, brains that do not simply disappear sometimes get smaller. In this particular fish, Sibyrhynchus denisoni the brain must have gotten a lot smaller. Check out this image, in which the braincase is in red, and the brain is in yellow. (The scale bar is 5 millimeters.) 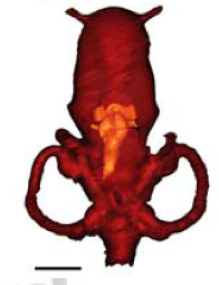 To move along the discussion of shrinkage, I thought it might be helpful to post the following passage from the paper itself, which will not be published until later this week in the Proceedings of the National Academies of Science. (For some reason, the journal lifts its embargo on us journalists days before they put papers online. So the link to the paper won't work just yet.)

Two possibilities come to mind. One is that the scientists are wrong, and the brain of Sibyrhynchus managed to shrink without disturbing the connections from the cranial nerves to their corresponding openings in the skull. Or they're right, and this fish had a very tiny brain lodged deep inside a big space. Why there would be such a mismatch between brain size and braincase size the scientists can't yet say. (Update: I forgot to mention that in many sharks and other fishes, the brain stops growing after birth, while the skull keeps growing.) Which is all the more reason, as Pierre Kerner points out in the comments, for paleontologists to start opening museum drawers and do some more scanning. Let's see what pattern emerges. Update, minutes later: Alan Pradel, the lead author of the paper just left a comment on all this in the previous post. Here's part of it: