Clownfish rely on darkness to hatch. Human lights are stealing it away. 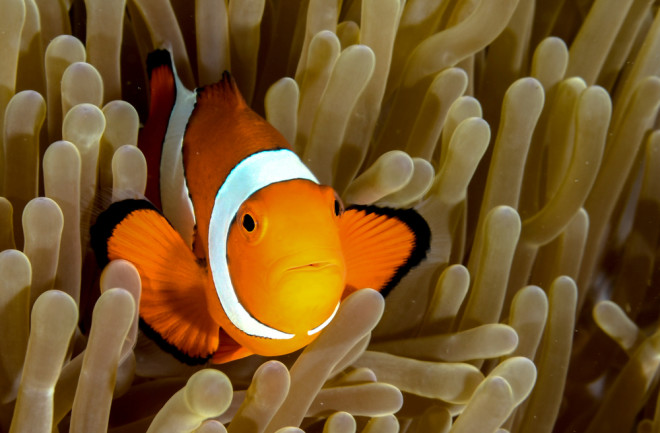 From space, the picture is crystal clear. Across the globe, cities twinkle with artificial light against the night sky. And the nocturnal expanse is only getting brighter. Scientists estimate the amount of artificial light at night grows by more than two percent every year. The nighttime glow carries detrimental consequences for human health and disrupts animal behaviors like migration.

Now researchers discover the glare might spell doom for Nemo — clownfish eggs do not hatch when exposed to nighttime light pollution. The finding may mean the end of the orange- and white-striped swimmers of Finding Nemo fame and could extend to other fish that live in coral reefs.

“Artificial light at night is becoming a greater concern among ecologists, as light is spreading globally, and the impacts on organisms can be severe, but very little research has been done around [artificial night light at night] in the marine environment,” marine ecologist Emily Fobert of Flinders University in Australia who led the research said in a press release.

As coastlines become more and more developed, the accompanying lights expose reefs to an artificial nighttime gleam. The light could have big impacts for clownfish as the bright swimmers rely on environmental light clues to time their births. Clownfish embryos hatch just after dusk, which helps them avoid daytime predators. When they do hatch, the larvae are small and transparent, making them all but invisible to nocturnal predators.

To find out how artificial light might affect clownfish reproduction, Fobert and team exposed ten breeding clownfish pairs to two light cycles. One group was on a schedule of 12 hours of light and 12 hours of complete darkness. The other group also got 12 hours of light but experienced 12 hours of dim light at night. The nighttime light levels were similar to the amount of light present near shore in light-polluted areas. The researchers tracked egg clutches in each aquarium with an underwater camera.

Although the fish were able to spawn and fertilize eggs to a similar extent in both groups, the dim light at night had a severe effect on hatching. Most eggs in the control group – 86 percent – hatched, but none of the eggs that experienced low light at night did, the researchers report Tuesday in the journal Biology Letters.

What’s more, when the team removed the artificial night light from the light-exposed group, the eggs hatched like normal. “The presence of light is clearly interfering with an environmental cue that initiates hatching in clownfish,” Fobert said.

The researchers note the problem could mean the birth rate may not be able to keep pace with clownfish deaths. Although larvae from distant reefs often replenish populations at another reef, larvae are attracted to light. That means the baby fish may settle in light-polluted reefs where the permanent night light compromises reproduction. The overall effect may mean decimated populations in areas with extensive artificial nighttime light.

“The overwhelming finding is that artificial light pollution can have a devastating effect on reproductive success of coral reef fish,” Fobert said.