The mosquito Aedes aegypti sucks the blood of people from all over the tropics, and exchanges it for the virus that causes dengue fever - a disease that afflicts 40 million people every year. The mosquito has proven to be a tough adversary and efforts to drive it from urban settings have generally failed in the long-term. So how do you fight such an accomplished parasite? Simple - use a better parasite. In fact, try the most successful one in the world, a bacterium called Wolbachia.

Wolbachia's success rests on two traits. First, it targets the most diverse group of animals on the planet, the insects, infecting the majority of species and about one in eight individuals. Second, it spreads like wildfire by using several extremely self-serving strategies, all of which screw over male insects in some way or other. Wolbachia passes from one generation to the next in the eggs of infected females. But without similar access to sperm, males are useless to it and has evolved a number of ways of dealing with that. Sometimes it kills males outright before they're even born; sometimes it turns them into females.

In other subtler cases, it ensures that infected males can only mate successfully with infected females. If they try to breed with uninfected ones, the embryos die at an early stage of development. This strategy is known as "cytoplasmic incompatibility" and while it's still unclear how it works, there's no doubt that it does. It gives infected females (who can mates with any male they like) a competitive advantage over uninfected females, who are restricted to uninfected males. With this upper hand, massive swathes of a given population eventually become Wolbachia-carriers.

Conor McMeniman and colleagues from the University of Queensland have found a way to use that to their advantage. They have found a strain of Wolbachia that can halve the lifespan of the Aedes mosquito and that induces complete cytoplasmic incompatibility. If introduced into a natural population, it should invade with tremendous zest.

Shortening a mosquito's lifespan may seem like a flimsy victory, but McMeniman recognises it as an important one. Only old mosquitoes really pose a threat to human health because it takes about two weeks for an individual to become infectious after it first sucks up a mouthful of infected blood. The virus first need to reproduce in its gut before travelling back to its salivary glands, where it can spread further. Because mozzies are short-lived anyway, most die before they reach that point, which means that any technique that slashes their already limited lifespan will have a huge impact on controlling the diseases they carry.

Finding a strain of Wolbachia that infects the Aedes mosquito wasn't easy. In a cruel twist of fate, the uber-bacterium doesn't naturally infect either of the mosquito groups that carry dengue or malaria, despite being relatively unfussy about its choice of hosts. But that doesn't mean it can't - a study four years ago proved that Wolbachia can infect Aedes aegypti and can spread to an entire laboratory population within a few generations. The race was on to find the right strain.

McMeniman's group found one called wMelPop, which naturally infects the fly Drosophila melanogaster and halves its lifespan. To acclimatise the strain to a new host, the team cultured it in mosquito cells for three years, producing a version with a preference for mosquitoes instead of Drosophila.

Their new wMelPop strain had all the right traits. It successfully infected mosquitoes and was passed down through over 30 generations. Virtually all of the larvae born to infected females carry Wolbachia themselves. And once infected, a female's days are numbered; under realistic conditions (including tropical temperature and humidity, and daily blood meals) Wolbachia halved the normal mosquito lifespan, just as it does in Drosophila. McMeniman even proved that these shortened lives were solely due to the bacteria by showing that the mosquitoes lived to their usual age if they were cured with a dose of antibiotics.

The Wolbachia strain was also clearly causing cytoplasmic incompatibility. When uninfected or cured individuals breed, over 80% of eggs eventually hatch. But when infected males mated with uninfected females, not a single one of 2,500 eggs produced a living larva.

This trinity of nigh-total inheritance, strong cytoplasmic incompatibility and life-shortening power is exactly the combination of traits needed if Wolbachia can be used as a weapon to control wild populations of mosquitoes. Certainly, strains with similar properties spread well enough in other insect species. Even though Wolbachia lowers a female's lifespan, they don't hurt her egg-laying ability, or kill her off before she gets a chance to breed. So a Wolbachia-based approach would never drive a mosquito to extinction - it would just kill older individuals before they become capable of spreading dengue fever.

It also means that the mosquito is under very little pressure to evolve resistance to the bacterium, because it's quite capable to raising hundreds of offspring before its life is cut short. Indeed, there's no evidence that Drosophila (the natural host of wMelPop) has evolved any resistance to it in over a decade.

You could, however, imagine that the loss of older mosquitoes would simply trigger the evolution of dengue viruses that develop more rapidly. It's certainly a potential downer, but the viruses are already under such pressures because mosquito lives are so naturally short. The fact that they don't already develop quickly suggests that there's some cost in doing so even if quick-off-the-mark viruses do evolve, it's likely that they'll be weaker versions of existing ones.

McMeniman's study is a promising start, but his enthusiasm is quite rightly tempered by a call for more research. His study hasn't shown that the approach would work, just that it can (and has a good chance of doing so). The next step is to do field-cage trials, where contained populations of infected mosquitoes are monitored under (mostly) natural conditions. And we'll need better models that simulate the spread of the bacterium and assess the potential for evolving resistance, no matter how small.

As a side note, this amusingly captioned image was released along with the paper. The caption reads: "Success of the experiments was dependent on human bloodfeeding of mosquitoes. That's McMeniman in the photo - he's a PhD student (read: the most junior person in the lab and, thus, lunch). 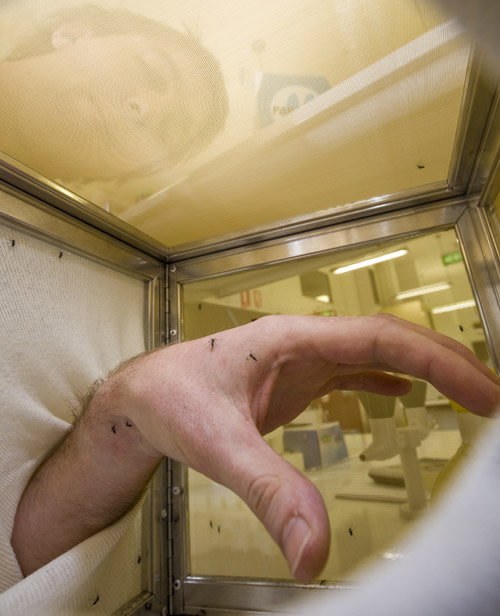 More on mosquitoes and Wolbachia: